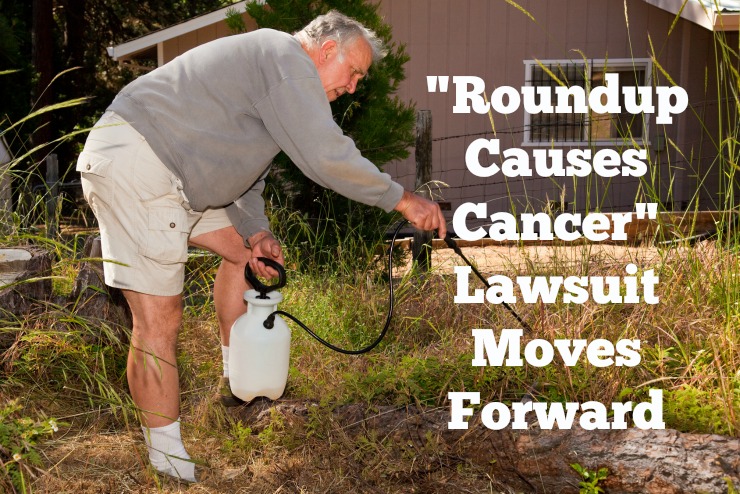 I am happy to report that in the first of its kind, a farmer stricken with non-Hodgkins lymphoma due to exposure to Roundup has won a huge monetary award in the courts.

Hopefully, this August 2018 victory will set a huge precedent, opening the floodgates for the thousands of other lawsuits waiting in the wings, which will force Monsanto to take its dangerous herbicide and its clones off the market permanently. Several EU countries have banned Roundup already.

Not surprisingly, Monsanto insists Roundup is safe and has vowed to appeal.

A summary of some of the most prominent Roundup lawsuits still pending is outlined below. Hopefully, these cancer stricken farmers will see justice soon!

Christine Sheppard, a Hawaiian farmer, began using Roundup on her coffee farm in 2003. After coming down with non-Hodgkins lymphoma seven years later (she is now in remission), she and her husband decided to sue, charging that glyphosate is not safe for humans as claimed by the company.

Non-Hodgkin’s lymphoma is one of the most common types of cancer associated with Roundup exposure.

Sheppard’s attorney Michael Miller was quoted by West Hawaii Today as saying that Monsanto is running a glyphosate “misinformation campaign” and said his clients’ suit would “force Monsanto to face the human consequences of their lies.”

In a big win for farmers and consumers alike, aggressive attempts by Monsanto attorneys to have the case dismissed have failed. Judge Michael Seabright ruled that Sheppard’s accusations may be accurate paving the way for the case to play out in the courts.

The case will be no easy win for Monsanto given the report by the World Health Organization which identified glyphosate as a probable human carcinogen, prompting bans by several EU countries.

Cancer Lawsuit not the First for Monsanto

The lawsuit by Ms. Sheppard is not the first.

Three Nebraskan farmers and one agronomist stricken with non-Hodgkin’s lymphoma are also suing Monsanto for unspecified damages. Similar to Ms. Sheppard’s claims, they allege the company misled its customers about the safety of Roundup.

The lawsuit charges that:

“Monsanto championed falsified data and has attacked legitimate studies that revealed Roundup’s dangers. Monsanto led a campaign of misinformation to convince government agencies, farmers, and the general population that Roundup is safe.”

The lawsuit also alleges that Monsanto “concealed or systematically sought to discredit” research demonstrating the danger of Roundup and related products containing glyphosate.

Agricultural workers coming down with cancer are joining farmers in the fight too. Similar lawsuits have been filed in California, Delaware, and other states.

Monsanto Supporters Not Sure Glyphosate is Safe

The response from a Monsanto rep to this barrage of lawsuits?

“While we have sympathy for the plaintiffs, the science simply does not support their claims.”

Despite this seemingly unflappable front, cracks are starting to appear in Monsanto’s carefully crafted image. Monsanto’s own sympathizers don’t seem to have much confidence in the safety of its products.

Monsanto Lobbyist Insists You Can Drink Roundup, Then Refuses to Do It

Recall the “it would have been hilarious if it weren’t so sad” debacle on French TV when Monsanto lobbyist, Dr. Patrick Moore, insisted during a live interview that Roundup was so safe that humans could drink it. When challenged to try some, however, the lobbyist repeatedly refused to do so.

Here’s how part of the interview went down:

Pressed one last time by the intrepid interviewer to drink some Roundup to prove his point, Moore says, “I’m not an idiot” and ends the interview.

While Monsanto scientists and lobbyists may not be stupid, they clearly seem to assume that most farmers and consumers are!

Royce is an aspiring writer and avid soccer player. He was raised on a fully traditional diet and enjoys sharing the principles of ancestral dietary wisdom with others seeking optimal wellness, vitality and recovery from politically (in)correct nutrition.

Eating Local Could Be This Easy