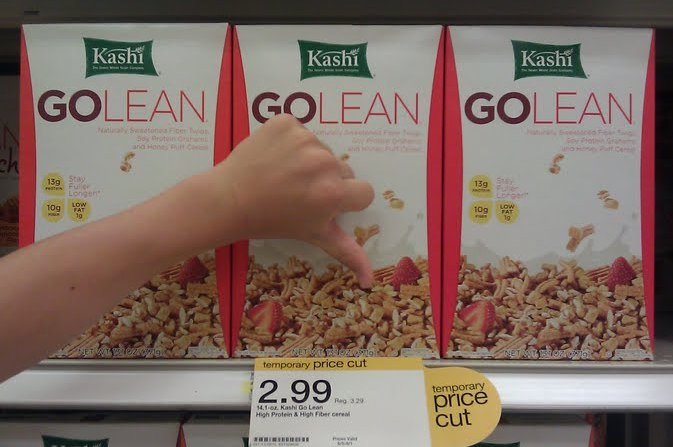 Despite being highly processed and not at all healthy, consumers still purchase box after box of “natural” and organic breakfast cereals thinking it’s good for them.

This is because consumers get so easily excited about a label with just one or two ingredients and no chemicals or preservatives, but rarely seem to consider how those ingredients are sourced or processed – which is many times more important!

A box of Kashi GoLean cereal was purchased from a Whole Foods in Boston and sent to an accredited lab for testing.

The cereal was 100% GMO and had pesticide residues despite having “natural” on the label.

Kashi responded by saying the information was inaccurate and misleading because it was not based on a formal scientific analysis of Kashi products.

How can testing a box of Kashi cereal at an accredited lab not be scientifically accurate?

Oh wait, I know!  It’s because Kashi wasn’t funding the testing behind the scenes so they could stealthily control the results that were reported, right?

Kashi’s arrogant and lame response is typical of giant food manufacturers like Kellogg, which owns Kashi, who are used to being able to claim just about anything they want about their products and get away with it.

Even more lame, when it became apparent that Kashi wasn’t going to be able to spin its way out of the PR nightmare, it was announced that Kashi would be 100% GMO free by …

Don’t worry guys.  Keep on eating that GMO, pesticide laced cereal for just a few more years and we’ll be sure to get our act together and get rid of them before you’re in a wheelchair!   And, if we’re lucky, you will forget all about this messy public relations snafu in a few short months so we won’t really have to change at all!

The fact is, Kellogg supports GMOs for use in “natural” products. According to the grassroots organization GMO Free USA, Kellogg is actively working against requiring the labeling of GMOs having contributed $33,000 so far to propaganda campaigns to defeat it.

Best not to trust food companies with your most important meal of the day and go barcode free with your breakfast choices.   The soaked cereals of traditional cultures are an excellent choice or, if you really need a cold breakfast cereal, make a truly healthy one yourself so that it doesn’t contain the extruded, denatured, allergenic cereal grains of the heavily processed, boxed variety that are falsely promoted on the label as somehow healthy because they are natural or organic.