How to Fly with Fresh Milk 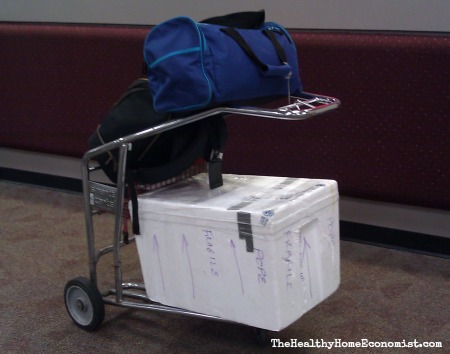 Today I am doing a happy dance because two of my children come home from nearly two weeks away at camp – over a thousand miles away!

The last time one of my kids was so far away for this long was 3 years ago. I learned a lot about summer camp survival from that experience. I was determined not to repeat the same mistakes this time.

The biggest mistake I made with our summer camp experience in 2010 was that I relied primarily on phone conversations with the camp to determine if the food situation was going to be appropriate for my child. I heard what I wanted to hear and that proved to be disastrous.

This time, I took nothing for granted and made sure that all the bases had been covered upfront.

The verdict is in and I’m so happy to report that the results are good this time – no tearful calls home with complaints about being so tired from the processed carb-heavy camp food that they can’t get out of bed (normally my kids are up and at ’em very early every morning – even on weekends – no morning brain fog on a Traditional Diet!).

Here’s what I did this time. Totally hardcore, I know, but sometimes you have to go that route to get the job done.

Flying on a Major Airline With Raw Milk

Yes, it’s true.  I actually successfully dared to fly on a major airline by checking a (very) large cooler jammed full of (gasp) 5 gallons of raw milk and a pound of raw butter.

Horrors!  And to think TSA didn’t lock me up!  I didn’t even get a strip search!

It’s not too hard actually. The trick is to be totally cool about it. If you start sweating profusely and acting nervous at the checked bags line, you’ll likely cause the TSA’s laser focus to zero in on you and cause you problems.

There’s nothing wrong with raw milk, is there?  No, there isn’t. It’s still a free country. If we want to drink raw milk as free citizens of the United States, we can and there’s no law against flying with it in your personal possession even across state lines.

I did take precautions and remove the raw milk and raw butter labels from the containers. If TSA chose to open the cooler (which they did not), then the items would just be containers of milk and butter to them.

The bag check agents were totally professional and courteous and asked all the appropriate questions. They asked what was in the cooler and why. I told them the (goat) milk was for my children’s special diet at camp. Some of the half gallons were frozen milk and some were fresh.

They didn’t ask if it was raw, so I didn’t offer. If they had asked, I would have been truthful and said yes. Again, flying with raw milk is legal, so even if they had asked, it shouldn’t have been a problem. It might have delayed things, however, and since I was in a time crunch getting to the gate as it was, I am glad they didn’t choose to inquire further.

When they heard it was goat milk, one of the bag agents started raving about how healthy goat milk is and that folks who drink it never get sick.

Exactly the response I was hoping for!

The cooler was checked and away it went.

Practical Tips for Flying with a Cooler

The most important tip for flying with a cooler is to buy a styrofoam one that you don’t have to fly home with. The airlines are charging hefty fees for checked bags these days, so you don’t want to have to pay to fly home with an empty cooler.

Here’s the large styrofoam cooler I used which only cost me $8.00 at a local discount store. Note: some airlines require that styrofoam coolers be inside a cardboard box.

Another advantage of a styrofoam cooler is that it is much lighter than a heavy-duty plastic one. If you go over 50 pounds with a checked bag, the cost goes up astronomically.  So, the lighter the cooler, the better. The bonus with a light cooler is that can pack more food into it and still stay under the 50-pound maximum!

Once you pack all your dairy into the cooler, place some lightweight ice packs in there and tape it shut with heavy-duty packing tape. Write your name, address, and phone number on the lid of the cooler with a permanent marker and also write fragile and “this side up” on the lid.  Write the word “fragile” on the four sides of the cooler as well.

One more word of advice. You cannot check a cooler at the curbside. You must check it inside with an airline agent who will ask you questions about it, so be sure to allocate extra time in case the line is long at the indoor check-in.

Besides ensuring my kids had plenty of raw milk and butter to tied them over at camp, I also did a few other things to keep them happy for the two weeks they were away from Mom’s home cooking.

Once we arrived at our destination, I rented a car (we had over an hour’s drive to camp from the airport) and we stopped at a supermarket so I could buy some real maple syrup for them to use for pancakes and waffles. This way, they didn’t have to use the GMO high fructose corn syrup laden fake syrup.  They were very happy about this as they really hate fake syrup.

I also bought a few cases of Virgil’s cream soda at the supermarket so they could have a soda treat and blend in with the other kids without being tempted by the commercial sodas and drinks with GMO high fructose corn syrup (HFCS) in them. My teenager especially was happy about this as HFCS makes him break out terribly and he made it very clear to me that didn’t want to eat any of it at camp.

For a healthy protein snack, I packed 5 – 1 lb bags of buffalo jerky which they kept with their personal items to snack on whenever they wanted to.

As far as I know, neither of them suffered any illness at camp, so it seems the strategy for having a few key traditional foods/supplements available along with buffalo jerky for snacking and old fashioned sodas for treats worked well – they stayed happy and healthy while enjoying their summer camp experience.

By far the hardest part was being female flying alone on the leg back home after dropping them off!