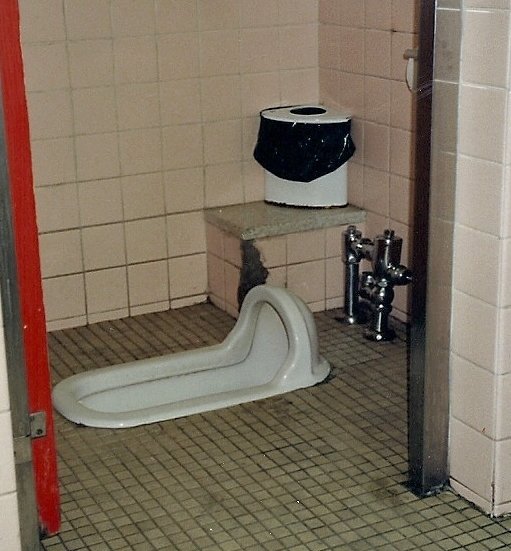 Editor’s Note: During my travels through Asia in the late 1980’s, one of the most difficult adjustments was the extreme difference in toilet habits between Eastern and Western culture. You can imagine my shock and surprise when I first entered a public facility in Japan only to be greeted by the squatty potty, aka toilet pictured to the right!

Believe it or not, these Asian style toilets are really quite easy to use (except on a moving train) and actually facilitate Nature’s Call much better than Western versions – provided you are steady on your feet and have a decent set of quads!

Now, the wisdom of Asian toilets has finally made it to America in the form of squatty potty stools of all shapes and sizes.  In today’s post, Fitness Editor Paula Jager CSCS opines in hilarious fashion on her newest toy – for the bathroom!

I don’t know about you all but nothing kicks my morning off better than answering Nature’s Call.  It just sets the stage for the whole day–especially when you’re able to drop a solid brick or two.  Hey, we all do it; some easier than others, some more than others.  It’s not talked about a lot and there’s usually not a lot of thought going into it but it happens.

While some things are done in solitude in a marriage, and this is definitely one of them in my book that doesn’t mean you don’t discuss it with each other.  Up until I was about 35 years old, it was a 3x a week event if I was lucky.  I never thought much about it and to me it was “normal”. My husband on the other hand has always been Mr. 2-3 Times a Day.  He thought I was abnormal.  When I got into fitness on a serious note and perhaps I may also have been paying better attention to diet that’s when things started moving–daily.  I felt much better and became Ms. Every Morning.

Let’s fast forward about 17 years and he and I are both the same way.  Things had been going pretty smooth for the most part for both of us but every once in a while there was a tad of struggle or a feeling that it didn’t all come out. Why is it that some people struggle more than others?

A healthy diet, metabolism and digestive process would certainly come into play here along with proper hydration but could there be something else?  Could we be doing something “wrong?”  I’d often wondered about this and a few months ago I came across a very interesting post on Facebook about a “Squatty Potty”.  When I first checked them out I was amazed, watched the video shaking my head “uh, huh, uh huh” and immediately ordered one.

I was so excited; I couldn’t wait for it to arrive.  I told my husband about it and he replied “are you nuts, people have been going to the bathroom for 1000’s of years” why do we need a Squatty Potty, especially me?”  “And how much did it cost?” I tried to explain to him that “thousands of years ago” or even a couple of hundred years ago people squatted when they went to the bathroom.  Plain and simple, very instinctual they squatted down booty to ankles and out it came.  To their credit their diet was most likely much better since there were less processed, refined and fast foods.  But that’s a whole other story.  When the modern toilet was designed in the throes of the industrial revolution in the mid 1800’s it was designed to sit on like a throne rather than the way the natives did it.  Many doctors at the time worried about this causing health problems because it went against nature.

That design placed the body in an unnatural position.  Let’s review the mechanics of going to the bathroom.  People control their defecation to some degree by contracting or releasing the anal sphincter.  The muscle however cannot maintain continence on its own.  The body relies on a bend between the rectum–where feces builds up–and the anus–where it comes out.  When we’re standing or sitting, the extent of this bend called the anorectal angle is about 90 degrees, which puts upward pressure on the rectum.  This keeps the feces inside and creates the need for straining to evacuate.  Attempting to defecate in the improper position (i.e. modern toilet) is like trying to defecate through a kinked garden hose. It just doesn’t work.  The squatting posture straightens out the bend and elimination becomes much easier and complete. 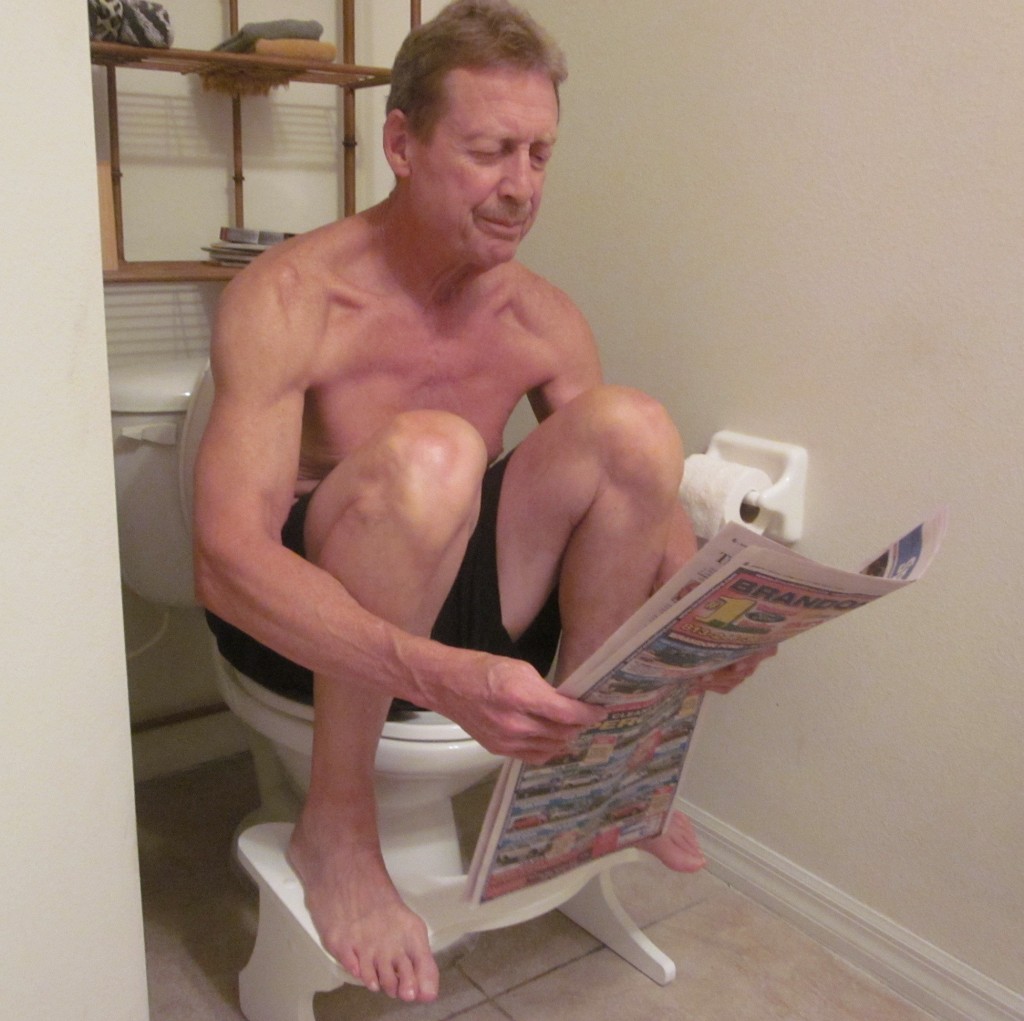 Why Squatty Potty Gets the Job Done Better

Research shows the following advantages of the squatty potty posture:

Well, that all sounded good to me.  I was thrilled when my new squatty potty arrived; and wow, you could actually feel the difference immediately.  You could feel it going straight down–plop!  I hopped off the squatty potty and my day was good to go–woo hoo!  I was convinced from the start but the true test was with Mr. 2-3 Times a Day.  About 3 days later I get home from work and the first thing my husband says to me it ‘wow, PJ–that Squatty Potty works”.  I thought you didn’t need it dear, I replied.  “Well, it just makes it better”.  How so dear?  “It all comes out”.

And this past weekend hubby spent 3 nights away from home with his college roommates for the USF game and a golfing weekend.  When he got home after a hug and kiss he mentioned how much he missed his Squatty Potty–that it “just wasn’t the same” and he needed to “clean things out”.  TMI?  Well, I’m just making a point.

The Squatty Potty slides right under your toilet and comes in white plastic, white wood and bamboo styles.  It also comes in 3 different heights 5”, 7” and 9” depending upon the height of your toilet.  We got the 9” Squatty Classic in white wood.  But I’ll be adding the bamboo for my downstairs bath soon.

There are a few other versions out there for simple purchase or you could purchase an actual squat toilet like Sarah pictured above like they have in Asia.

Either way, take your health up a notch by improving elimination and getting your butt off the toilet.