How to clarify bone broth into clear stock. In addition, a detailed discussion of whether this effort is necessary or beneficial to improve the digestibility and safety of the final dish. 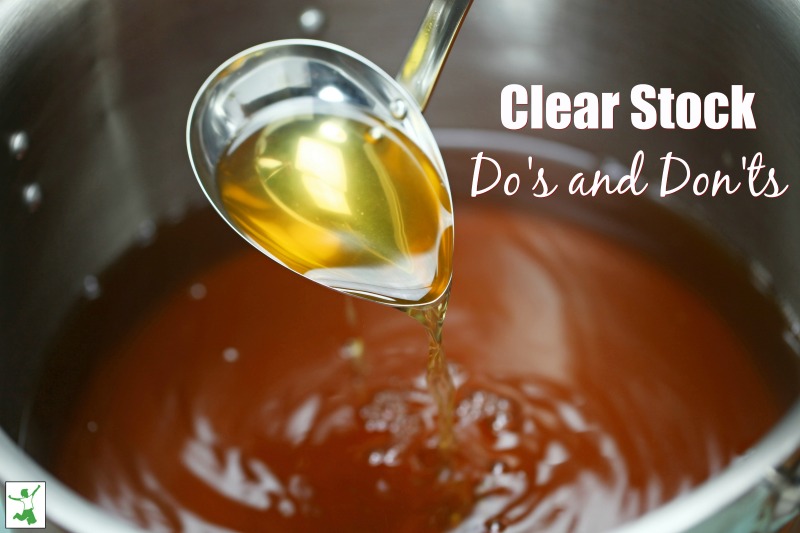 Perhaps you’ve noticed that most of the time, broth made yourself in a home kitchen produces a slightly cloudy mixture.

The particles responsible for the murkiness consist of tiny suspended protein fragments, globules of fat, and potentially bitter-tasting impurities that can give the broth an off-flavor.

The question is, should you bother to clarify broth from these invaders to make what’s called “clear stock”?

Does it make the final dish healthier and more digestible?

The answer to these questions is both yes and no.

There are three distinct phases where you can choose (or not choose) to clarify your broth.

Let me try to shed some light on when it is worth it to take the time to clarify your broth.

At the Start of Cooking

When it comes to clear stock, the quality of the main ingredients definitely matters.

Meat and bones from supermarkets and other conventional sources typically produce a considerable amount of white, foamy scum. This unappetizing sight rises to the top as the stock is initially heated and begins to cook.

Removing or clarifying the stockpot from this scum before the hours-long simmering process begins is absolutely imperative!

Taking the time to skim off this foam with a large slotted metal or wooden spoon (never plastic!) ensures the safest and tastiest dish that is free from these potential toxins.

Make the same broth recipe using meat and bones from organic, pastured or free-ranging animals, and you will quickly notice the amount of scum that comes to the top as the pot gets hot is far lower or even nonexistent.

I’ve had more than one person tell me that making broth is what finally convinced them that the higher price for quality grass-fed meats was definitely worth it!

Thus, it is always a good idea to clarify broth from white, foamy scum! If you don’t skim it off at that opportune time, it will reabsorb into the pot and the chance to remove it will be lost.

The best cooks suggest that the key to making the clearest stock is to never let broth come to a boil.

To that end, they suggest to always simmer with the lid off-center or even completely off. (1)

While this may help, the time required to babysit the stockpot to ensure the temperature never gets too hot is not worth it, in my experience.

Once the stockpot is skimmed as necessary before the simmering begins, it is best to affix the lid, turn down the heat, set the timer and move onto something else until the stock is done!

You will have an opportunity to clarify the broth again after cooking is complete.

At that time, remove the large pieces of bone, meat, joints, and skin with tongs and set aside. Why do I include skin and joints if possible as well as meat and bones? So that the broth contains all three main types of collagen.

Then, place a strainer inside a large glass or stainless steel bowl (never plastic!). Line it with a cheesecloth or thin white flour sack cloth, and carefully pour the broth into the bowl.

The cloth will catch all the particles including the fat for the clearest stock possible.

This type of clear stock is what you want if you are planning to make clear soups or reduction sauces.

Straining Stock while Keeping the Fat

If you plan to make a blended or cream soup and wish to keep the fat intact but remove all the particulate matter, follow this alternative method.

Sometimes, if you make an especially large batch of broth, you might want to defat some of it for clear soups, while keeping the fat in other containers destined for blended soups and sauces.

Certainly, retaining the fat is the most nutritious way to go!

However, people who have had their gall bladders removed might favor defatted stock as well for ease of digestion.

In that case, once the partially clarified broth is chilled in the refrigerator, you will have yet another opportunity to clarify by removing the fat if you desire.

Chilled fat neatly rises to the top of each mason jar in the refrigerator and can be neatly peeled off in one piece! I typically put it in another container to be used for vegetable sautés. It will last for months.

While I’ve described to you the three-step, opt-in/out method I use to create clear stock, I should note that my Grandmother did it quite differently!

For each quart of broth she needed to clarify, she would add one beaten egg white to a pot of strained stock.

She would then bring the pot to a low boil for about 5 minutes. After removing the pot from the heat, the cooked egg white pieces rise to the top bound together with any other fragments and impurities.

She would then sieve off these egg-y bits after the clear stock cooled.

By far, this method produces the clearest stock you’ve ever seen…ideal for a bowl of breakfast broth! 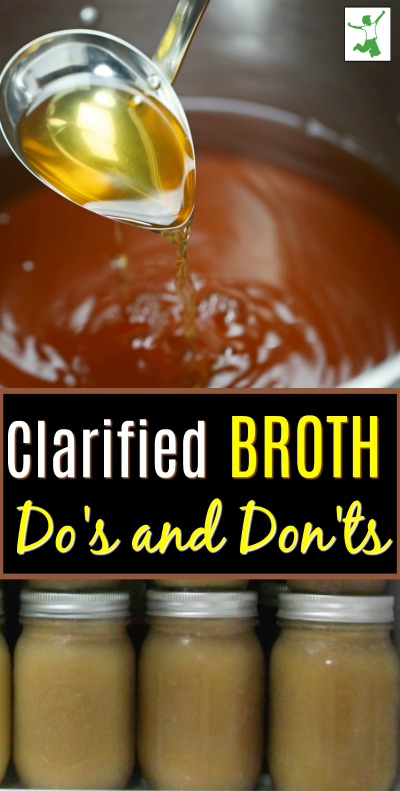 How Long Does Clarified Stock Last?

The firm, round disk of fat that comes to the top as broth cools in the refrigerator serves a very important purpose. It seals the stock and locks in the freshness.

Once the fat is removed, the clear stock will only last about 5 days refrigerated. If you reboil it, it will last a few days longer.

For the best taste, I would suggest freezing clear stock that you won’t use in about 3 days.

Alternatively, leave the fat in the stock so that it is sealed in the fridge. Then, it will last far longer. I’ve had several people report to me that stock sealed at the top by the fat will easily last in the refrigerator 1-2 weeks or more.