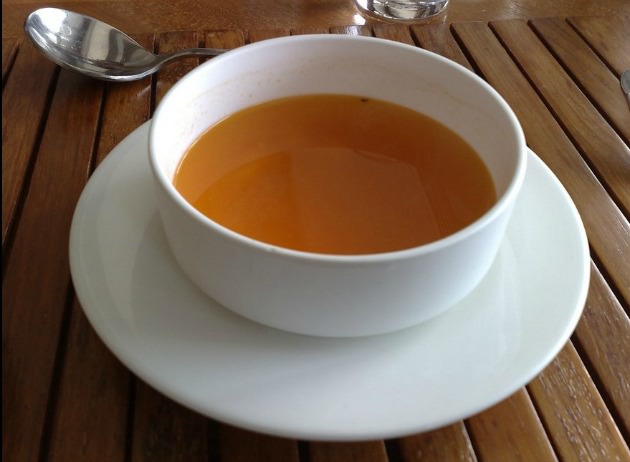 Is there as much calcium in a cup of bone broth as in a cup of milk? Many people in the Real Food community seem to think so.

The hard truth is that the calcium content of homemade bone broth doesn’t even come close. The good news is that broth still lives up to its bone-building reputation, just not for the reason most people have assumed.

It makes logical sense that bone broth would be an excellent source of calcium. After all, about fifty percent of bones consist of minerals, with the largest store by far being calcium phosphate, a combination of calcium and phosphorous arranged in a formation called hydroxyapatite. Bone also contains small amounts of magnesium, sodium, potassium, sulfur and other trace minerals.

Even so, only small amounts of these minerals end up in the broth, even when properly made with vinegar or wine to help pull them from the bones.

The most thorough study of this topic occurred in 1934 when McCance, Sheldon, and Whittleson of King’s College Hospital in London reported in Archives of Disease in Childhood that the calcium content of several types of bone broth at just 5.2 to 28.6 mg per 100cc (12.30 to 67.7 mg per cup). The researchers compared this to 119 to 128 mg calcium per 100 cc (281 to 303 mg per cup) in cow’s milk. The researchers reported the highest levels of calcium in the broths prepared with vegetables.

Recent USDA figures for brand-name canned broths sold at supermarkets show calcium at just 14 mg per cup (1.4% of the RDA) for beef and 9 mg (0.9% of the RDA) per cup for chicken. By comparison, USDA reports 291.0 mg of calcium per cup for whole milk.

While it is easy to dismiss these figures as what’s to be expected from the poor quality of broth found in commercial products, low calcium levels were also reported by Saffron Road and Flavor Chef Broths, two excellent brands sold in health food stores. The Nutrition Facts labels reported on their labels are 0 percent and 4 percent of the RDA, respectively, per cup of the RDA for calcium.

Sally Fallon Morell, President of the Weston A. Price Foundation and I found this so unbelievable that we decided more testing was warranted before completing Nourishing Broth: An Old-Fashioned Remedy for the Modern World (Grand Central Life & Style, September 2014).

The reports that came in from Covance Laboratories in Madison, Wisconsin, were much the same. Broth prepared by Kim Schuette of Biodynamic Wellness of Solana Beach, California, showed low levels of calcium at 2.31 mg per cup (from a whole chicken plus two chicken feet but not vegetables), while broth from Lance Roll of Flavor Chef showed 6.14 mg per cup (from broth made with bones and vegetables).

The inescapable conclusion is not much calcium ends up in the broth, even when the bones are cooked long enough to have softened and begun to dissolve.

As the King’s College research team found back in 1934 and we confirmed as part of the analysis for the book Nourishing Broth, the best way to increase the calcium content of bone broth is to include calcium-rich vegetables while making the broth.

Adding milk or cream to the broth to make cream soups or chowders would most appreciably increase the calcium content.

Upon hearing that bone broth supports bone health despite its low calcium content, most people conclude that its minerals must be exceptionally bio-available and thus easily digested, assimilated and utilized in the body. Given that “like feeds like” we might also assume the minerals are present in optimum ratios for bone building. In contrast, bone-building supplements are often formulated with high levels of hard-to-absorb forms of calcium and without full complements of bone-building trace minerals. Bone, after all, is not built on calcium alone. In fact, bone is built on a scaffold of collagen, making collagen the most important bone-building component in broth.

Collagen is the most abundant protein in the body, constituting between 25 and 35 percent of the body’s total protein, and needed for building healthy bones, cartilage, skin, arteries, corneas, placentas and just about every other structure in the body. Collagen production in the body slows down age and ill health, causing skin, joints, and bones to become drier, less pliant, thinner and weaker. Think sagging skin, creaky joints and the brittle bones of osteoporosis.

Human bones contain anywhere from 50 to 70 percent mineral and 20 to 40 percent collagen, with collagen fibrils providing the structure. Properly made bone broth is rich in collagen not only from the bones but also from attached skin and cartilage. Although collagen’s giant triple-helix proteins “denature” — which is to say break down — during cooking, we end up with plenty of the glycine, proline and other amino acids needed to manufacture our own collagen. Proline and glycine are the keys to tensile strength, resilience and water-holding capacity of healthy collagen. Although both are considered “nonessential” amino acids, most people cannot manufacture enough and benefit greatly from broth and other proline and glycine-rich foods. Accordingly, many top researchers believe these amino acids should be considered “conditionally essential.”

To build good bone we need collagen above all. The basic building blocks of bone are collagen fibrils that form a latticework for deposition of calcium phosphate and other minerals. The collagen cross-links are more important for whole bone strength and fracture resistance than mineral levels and patterns. Indeed, some people have bones thick with calcium and other minerals that are weak and crack under tension like unreinforced concrete.

Diabetics, for example, may suffer from poor bones, not because of low mineral density but because their collagen is damaged by the advanced glycation end products (AGEs) created when blood sugar levels are chronically high. While this is most apparent in diabetics, anyone suffering from blood sugar problems such as hypoglycemia, insulin resistance, and Metabolic Syndrome will have AGEs contributing to osteopenia and osteoporosis.

Most published collagen studies have focused on osteoarthritis, but Milan Adam, DSci, of the Institute of Rheumatism Research in Prague (1928-2008) studied 120 osteoporosis patients over a period of three years and published his research in Therapiewoche in 1991. He treated half with calcium and half with collagen hydrolysate. Loss of collagen and bone mass as seen in bone-breakdown products were significantly lower in the collagen hydrolysate group than in the calcium group. Best of all, collagen hydrolysate reduced the likelihood of bone fractures significantly. Hydrolyzed collagen is a gelatin product that is readily soluble in water, making it easy to use as a food supplement and in food manufacture. It does not gel at normal temperatures and has little effect on the taste, smell or “mouth feel” of foods.

In 1996, Dr. Adam published a second study in Therapiewoche involving 108 post-menopausal women with osteoporosis and bone mineral density lower than 80 percent. He reported collagen hydrolysate enhanced and prolonged the beneficial effects of calcitonin and improved overall markers of bone metabolism. Calcitonin is a hormone secreted by the thyroid that has the effect of lowering blood calcium.

In October 2000 Roland Moskowitz, MD, of Case Western Reserve University, reported his success with collagen hydrolysate for both osteoarthritis and osteoporosis in Seminars on Arthritis and Rheumatism He too found calcitonin plus collagen hydrolysate inhibited bone collagen breakdown better than calcitonin alone, making it “of interest as a therapeutic agent of potential utility in the treatment of osteoarthritis and osteoporosis. Its high level of safety makes it attractive as an agent for long-term use in these chronic disorders.”

More research is clearly needed, but with osteoporosis, a threat for 200 million people worldwide and forty-four million American men and women over the age of fifty, these findings on collagen are certainly promising.

What to Do Now?

For years, osteoporosis prevention relied on calcium alone. That has proven problematic for multiple reasons, including the fact that booming calcium supplement sales have resulted in marginal results at best. What’s more, recent news headlines in the New York Times and other major publications have warned against calcium supplements for reasons ranging from pain from kidney stones to death by heart attacks and stroke caused by calcification of the arteries and heart valves.

The problems of these studies — or the headlines summing them up — are legion, starting with the failure to differentiate between forms of calcium that are bioavailable to the body and the cheap, hard-to-absorb calcium carbonate form commonly found in mass-produced supplements. Most people do poorly eating limestone after all. The human body was also never designed for isolated minerals alone. Finally, supplement failure and/or unwanted side effects are far more likely to occur with participants experiencing digestive disturbances, acid/alkaline imbalances, and other vitamin, mineral, fatty acid and amino acid deficiencies.

More recently the focus for osteoporosis prevention has shifted to massive doses of Vitamin D plus calcium, perhaps with a complement of trace minerals. That’s clearly a better approach, but the fixation on Vitamin D fails to consider the need for a right balance with Vitamins A and K not only for bone building but for overall health. Although Vitamin K and collagen have started showing up in better quality supplements, Vitamin A remains underappreciated with most of the functional medicine crowd and is tends to be left out of the mix.

Experts will probably argue about the inconsistent and often contradictory literature on calcium and other supplements for bone health for years to come. There’s little arguing though about the importance of obtaining calcium from food. Quite simply, excessive intake is unlikely to be a problem, although the value of modern pasteurized, homogenized and fractionated dairy products has been called into question.

If we look back at the diets of traditional people who retained strong, flexible bones throughout long and productive lives, it’s apparent the answer lies in “nose to tail” eating with a variety of nourishing real foods.

Traditional peoples did not rely on pills, powders and potions.

While it’s fortunate that modern science supports bone building with food-based collagen hydrolysate and gelatin products (vetted glyphosate-free sources) and these can be useful adjuncts to a real foods diet, the better and tastier solution is still daily bowls of nourishing broth.

The Truth about Your Morning Coffee Fix