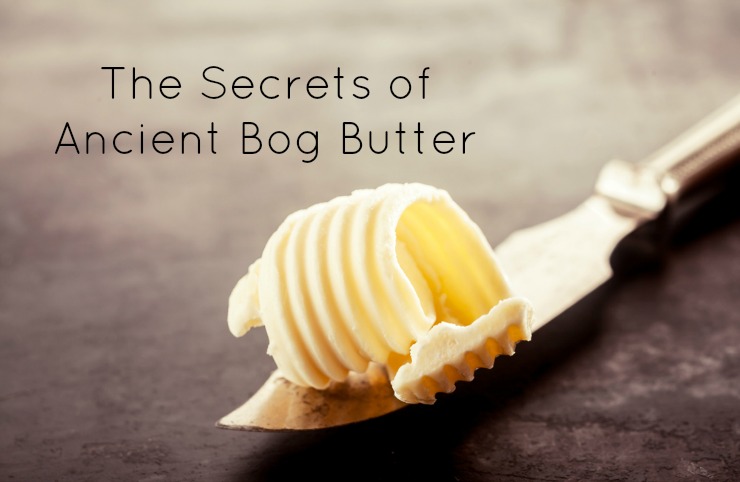 One of the most frequent questions I get about my video and article on making butter is this:  “How long does it keep?”

While this may seem like a joke, it truly is no exaggeration when it comes to ancient bog butter. There were certainly no butter substitutes back then!

For the past two centuries, people have been digging up bog butter, the ancient version of Kerry Gold, in Irish cold water swamps which literally date back millennia!

According to Smithsonian magazine:

The latest discovery occurred in June 2016 in County Meath, Ireland. Jack Conway was cutting turf from Emlagh bog near Drakerath to store up to burn during the coming winter when he found a 22 pound, football-shaped chunk of butter.

It was solid too, as the modern conception of whipped butter never would have lasted that long.

Scientists at the Cavan County Museum estimated it to be more than 2,000 years old!

Why Store Butter in a Bog?

James Farewell’s 1689 poem The Irish Hudibras declares:  “butter to eat with their hog, was seven years buried in a bog”.

Bury butter for seven years and then eat it?

As it turns out, the cold water swamps in Ireland called peat bogs are the perfect environment for preserving organic matter and allowing it to safely ferment, improving the nutrient profile and digestibility.

The University of Michigan reported in 1995 that one of their scientists stored meat in a bog as an experiment. Analysis of the meat two years later revealed that it was just as preserved as meat stored in a freezer for the same length of time.

What’s even more interesting is that bog butter wasn’t typically salted. Heavily salting food was a common method for preserving food before the advent of modern refrigeration.

Clearly, the butter buried in a bog approach worked extremely well for ancient societies because millennia later, it still retains that familiar buttery taste and smell.

The curator of Cavan County Museum who was one of the first to examine Conway’s find said:

Even more incredible, most of the bog butter is still edible according to scientists. “Theoretically the stuff is still edible, but we wouldn’t say it’s advisable,” said Andy Halpin of the Cavan County Museum.

Irish celebrity chef Kevin Thornton, the owner of the Michelin-starred Thornton’s Restaurant in Dublin, was brave enough to try.

He tasted a 4,000-year-old sample of bog butter, which frequently has the consistency of cheese. He said this about the experience:

I was really excited about it. We tasted it. There’s fermentation but it’s not fermentation because it’s gone way beyond that. Then you get this taste coming down or right up through your nose.

Curious to see what bog butter tastes like, but not brave enough for the up the nose experience, Ben Reade, head of culinary research and development at Nordic Food Lab created his own modern version of bog butter. He buried it for only three months before taste testing it at the Nordic Food Lab in Copenhagen and then again at the Oxford Symposium on Food and Cookery in the UK.

You can read about his entire experience including the preparation of the bog butter here. His description of the taste test:

In its time underground the butter did not go rancid, as one would expect butter of the same quality to do in a fridge over the same time. The organoleptic qualities of this product were too many surprising, causing disgust in some and enjoyment in others. The fat absorbs a considerable amount of flavor from its surroundings, gaining flavor notes which were described primarily as “animal” or “gamey,” “moss,” “funky,” “pungent,” and “salami.” These characteristics are certainly far-flung from the creamy acidity of a freshly made cultured butter, but have been found useful in the kitchen especially with strong and pungent dishes, in a similar manner to aged ghee.

It’s no wonder that ancestral cultures held butter in such reverence. A nutrient dense food that was easily stored and preserved for times of scarcity, famine, or perhaps even celebration. Bog butter was no doubt the ancient equivalent of edible gold!

Coconut Oil Capsules: As Beneficial as Straight Off the Spoon?