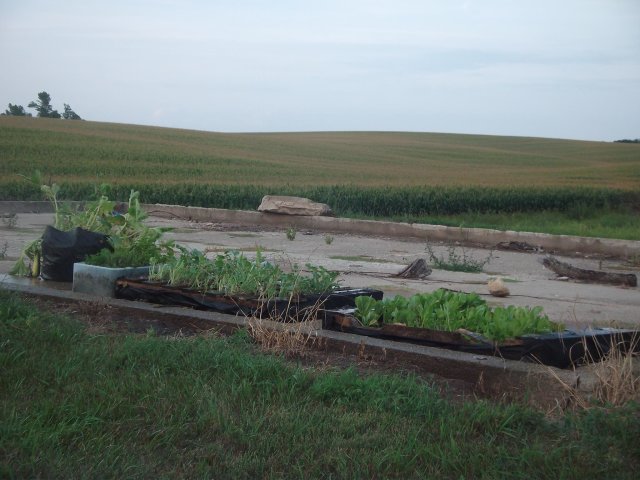 Roger Doiron, Director of Kitchen Gardeners International, has just provided an update on the situation in South Dakota where a 4 year old girl’s garden is threatened with removal by a property management company under contract from the USDA.  The child and her single, disabled mother live in a government subsidized housing development.  Read about their predicament here.

Below is the text of Mr. Doiron’s response.  While the 10,000+ people who have signed the petition and the hundreds who wrote emails have definitely gotten the USDA’s attention, the future of Rosie’s garden still remains uncertain. The picture above shows the current location of Rosie’s garden – it has been moved from it’s original location outside the back door of her mother’s unit to a place where it is not easy to water and in the direct sun where it is not likely to thrive, unfortunately.  There are not yet any plans to move it back after necessary work is done around the buildings.

I thank Mr. Doiron for providing this thorough update on this heartbreaking situation. Even though the original post on this blog on Rosie and Mary’s predicament was appropriately and accurately updated as more details emerged from the USDA’s email response, the article was picked up by numerous other sites and bloggers who conveyed their own opinions about the story as they saw fit and which is certainly their right and privilege.

I want to provide you with an update on Rosie’s garden in South Dakota and also set the record straight on one point. This matter has moved a lot over the past three days. Over 10,000 people signed our petition asking the USDA’s Director of Rural Development in South Dakota to help 4 year old Rosie, her mother Mary and other people living in subsidized housing to be able to grow some of their own food. And hundreds of you wrote respectful emails delivering the same message.

Thank you for doing that as you have really gotten the USDA’s attention about the need to think about how food gardens can be made more accessible to people living in subsidized housing.

Despite our best efforts, though, the future of Rosie’s garden remains very uncertain. Since writing to you last, the garden (consisting mostly of tender greens) has already been removed from its very close and convenient location to one where it’s not likely to thrive: to a large concrete slab out in direct sun and out of easy watering range (see photo). The garden was moved in order to carry out landscaping work around the building with no plan to move it back. At this point, it is unclear what the final solution will be but the campaign has motivated the property management company and the USDA to find one with the property owner. As an act of our good faith and as a way of recognizing theirs, we’re retiring our petition to give them an opportunity to focus on finding a better long-term solution for Rosie, Mary and the other tenants in their building wishing to grow a garden.

In a perfect world, we would have been able to announce a quick and complete victory in this case but the real world is messier and more complicated than that. On that point, our campaign may have created some unintended messiness of its own in that some bloggers twisted the facts of the case to try to serve a different, non-gardening agenda about the USDA and the role of government in general. While the USDA has not been as responsive and proactive as we would have liked in this case, it is patently untrue to say that it or its employees are “anti-gardens” or “anti-children” as some bloggers have outrageously reported. Although the property management company claimed that the garden needed to be removed per USDA instructions, the USDA has clarified that it has neither a policy against gardens at subsidized housing buildings nor an explicit policy for them either. Hopefully, our little effort will have encouraged them to consider the latter in a more urgent and energetic way.

Thanks again for tuning into this issue and for raising your voice on Rosie and Mary’s behalf. Mary REALLY appreciates it and wanted me to convey her gratitude. You can count on me to be back in touch with any new developments as they happen.

PS: A number of you have written to me to inquire about donating garden supplies to Mary and Rosie. Thank you. Let’s hold that good thought for now until we hear if they have a suitable gardening space to call their own.

UPDATE 8/27/2013:  According to KGI, the property management company handling the 8-unit rental property where Rosie and Mary live and the property owner have mutually agreed to build the family a new raised bed vegetable garden for them and the other tenants next spring.  Unfortunately, it seems the USDA is a no show in the resolution process and has yet to respond to inquiries as to whether it will establish a policy to prevent this sort of subsidized housing harassment in the future.