Editor’s Note:  The following essay by Tim Wightman, sustainable farmer and President of the Farm to Consumer Foundation is a response to the Dodge Superbowl Commercial “God Made a Farmer” that was seen by millions this past weekend.  I have included the commercial here for you to view prior to reading Mr. Wightman’s eloquent, insightful and moving words.

Are you a sustainable farmer?  How did you react to the “God Made a Farmer” commercial? Please share your thoughts in the comments section.

God may have made a farmer ….

I came of age on the Great Plains of this continent spanning from Texas to North Dakota seated in the cab of a combine consuming endless square circles of wheat for 4 summers. I met, worked with and for many farm families during those years. We regularly worked 16 to 18 hour days, sometimes for as long as 103 days in a row.  Three times a day on AM radio, the words of Paul Harvey rang clear and true, reinforcing the work ethic those of us in the fields came to acknowledge as sacred.

Mr. Harvey told me John Wayne had passed on along with many other stories and legends of hard work and sacrifice that seemed to be the path of every American who had succeeded in this land and the selfless contribution that was the ingredient to success. I had heard the same mythology from my grandfather and his peers cutting trees and pulling stumps and calves and nursing food and forage from the land where only the wild had existed before.

So in 1979 I headed west not knowing if I had graduated early from high school to earn my place in the agricultural community through the many hours and sacrifice I was told was part of the job.

7 months prior Mr. Harvey gave that speech that served as the basis for the Dodge Super Bowl ad to the attendees of the Future Farmers of America National Convention. Little did the attendees know that the Earl Butz expansion model of cheap money to farmers was at full bore and by 1981 the planned consolidation of that policy would hit the agricultural community harder than anything Mother Nature could ever have thrown at them. 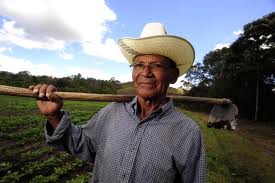 Farm Aid was launched in 1985 to pick up the pieces and I was left with the task of finding work in a rapidly disappearing calling.  It seemed all my effort was lost to a fading memory of a proud history now blamed for doing itself in. It wasn’t until 1994 that I heard of a new movement in agriculture. They called it sustainable, community supported and organic but the movement was so new, it had just barely gotten off the ground.

As we sit and watch this commercial heralding the fact that “God made a Farmer”, it is important to remember that it was Big Ag and its lobbying in Washington that broke that same farmer’s back.

This ad perpetuates the myth that rugged individualism and the competition it creates was and is the way forward. Perpetuation of the delusion that the products grown are of no value at the farm gate, that the farmers who grew them are lucky to get anything for them, and that “off farm jobs” are normal.

In this finite wisdom we now have a collapsing health care system and soils near the end of their ability to provide for us.  This is all part of Big Ag’s “bargain” – a chemically altered microbial system that has been so compromised that the tragic end result is too much to face so no one mentions it save for the occasional whisper.

The visuals of the Dodge “God made a Farmer” commercial is what we have always wanted to believe, told we should believe. I find myself having lived long enough to call 1978 long ago and words from that time stir memories and passion today. I even found myself being reminded of the myths and desire to be that rugged individual that was up and at it before much of the country hit snooze. By the end of the commercial, a sickening feeling of being sold a lie and persuaded to believe it set in, and how the reality of today’s farming community is so far from Mr. Harvey’s words of 1978.

There are those who still want to feed us, but to do so alone as a rugged individual is no longer an option. It is not that they all want new Dodge pickups, it is the fact that all should be eating in the land of plenty and no one should be scared of their food.

The commercial conveniently glosses over the fact that three-quarters of those farmers in the commercial operate at a loss for the food industry. Yes, they are their own boss but it is not fair to burden others for the sake of ourselves.

I ask that we do not take these myths, these manufactured perceptions perpetuated in the commercial to our farmer or farmers market this week. Thank them for thinking and growing out of the box. Yes, they work hard but no longer need to stand alone.

It is this generation of local farmers that will put the face of agriculture back to its rightful place in our society. Every dollar you spend directly with a local farmer is another dollar less that will be used against all of us.

I fell for the hype of serving a corporate food system with duty, honor and 100 hour weeks and very nearly ruined my health in doing so. I am now reminded of all the John Henrys I have known over the years, desperately trying to stay ahead of the system. I am reminded of the migrant workers who’s names we will never know still working the 100 hour standard. I am reminded of all the farm sons and daughters who are not on the land. God may have made a farmer, but Big Ag broke his back, broke the spirit of his wife and damned near turned our futures to dust.

Eating Local Could Be This Easy