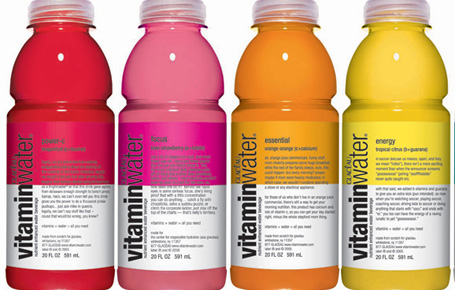 There’s a lady in my yoga class who brings a bottle of Vitaminwater with her to every session.   It seems to me that this product has grown increasingly prominent at healthfood stores and even regular grocery stores over the past year or so.

Whoever is in charge of marketing this product line is obviously doing a stellar job (whether it’s a job done with integrity is another matter entirely).

I must confess that I didn’t know much about this product at all, but seeing it at every yoga session got me to thinking – what exactly is in this stuff anyway?   It’s obviously getting popular with a  more health conscious than average crowd.     Well, I did a little digging, and here’s what I found out.

Vitaminwater Has Nearly as Much Sugar as a Can of Coke

Did you know that one 20 oz bottle of VitaminWater has a whopping 33 grams of sugar in it?  You have to read the label carefully to figure this out as one bottle equals 2.5 servings and each serving has 13g of sugar.  Most folks would miss this with a cursory reading of the ingredients, instead thinking that the entire bottle has 13g of sugar. Dangerous mistake!  A 12 oz can of Coke doesn’t have much more sugar at 39 grams!

The type of sugar used in VitaminWater is crystalline fructose, a fancy name for corn syrup – the kind of sugar primarily responsible for the abdominal spare tire epidemic and the same, cheap sweetener used in soda.

Dr. Richard Johnson MD, author of The Sugar Fix, strongly recommends keeping fructose from all sources under 25 g per day. One bottle of VitaminWater and you have already exceeded the limit by a large margin. Excess consumption of fructose raises uric acid levels to dangerous levels in the body.   Uric acid is a major contributor to obesity, kidney disease, insulin resistance, and high blood pressure, even in adolescents.  Lowering uric acid levels normalizes high blood pressure in the vast majority of cases.  Given the excessive amount of fructose in VitaminWater, there is simply no place for it in a healthy diet. Period.

“Hydrate responsibly” is the slogan imprinted on the VitaminWater label.  How do companies get away with this kind of misleading terminology?   As if a fructose laden drink could possibly substitute for pure water as the ideal method of hydration!   Attempting to hydrate with VitaminWater is, in fact, purely irresponsible.

The final nail in the coffin for VitaminWater is that the “vitamins” aren’t really vitamins at all.    They are synthetic chemical isolates, not even close to the same vitamins naturally encountered in fresh, whole foods.   Synthetic vitamins should be avoided as they act like drugs in the body and can cause imbalances over time.

Don’t be fooled by VitaminWater.    Slick marketing does not a healthy product make!   Now I’ve got to figure out a really nice way to let my yoga friend know the truth about her workout drink of choice.   Not an easy task, but a true friend would say something, don’t you think?