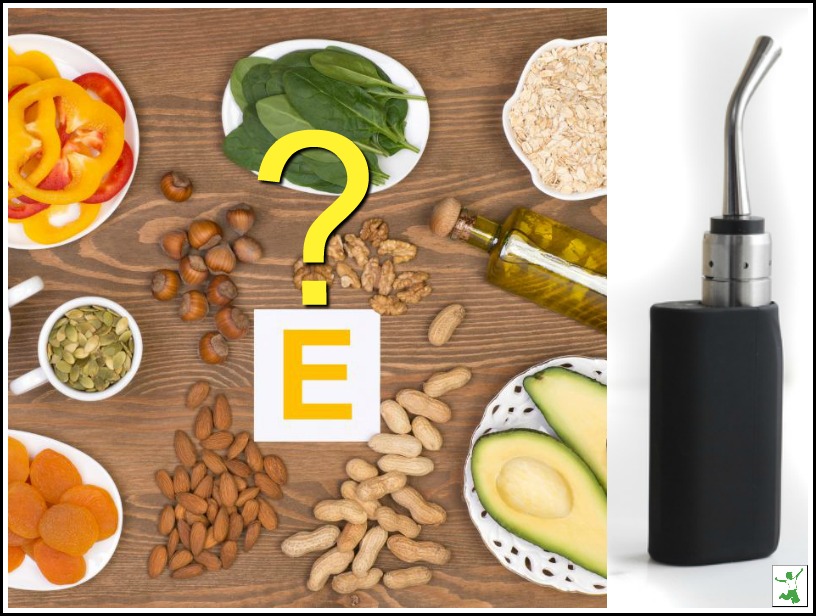 Is Vitamin E dangerous? This is the initial and confusing takeaway from headlines that the Centers for Disease Control (CDC) identifies it “definitively” as a suspect in vaping sickness.

This totally new and devastating lung disease has come out of left field in recent months. So far, it has claimed the lives of 39 people with 2,051 additional cases. (1)

The headlines have spawned panic in some nutritionally conscious individuals. A fat-soluble substance, vitamin E acetate is a prominent ingredient in thousands of foods and supplements. Personal care products such as skin creams also frequently contain it.

If it is toxic to inhale, it might be dangerous to consume too is their line of thinking…

Digging into the research, you quickly realize that the actual issue was paradigmatic…looking at vitamins as isolated chemicals acting in a vacuum without regard to how they affect one another synergistically. (3)

It is important to look at this announcement about Vitamin E similarly before coming to any conclusions.

It is crucial to note that Vitamin E acetate, also known as alpha-tocopherol acetate is the substance identified by the CDC as problematic.

Its structure is not even close to natural vitamin E.

Real vitamin E from plant foods consists of a single stereoisomer, two molecules made of the same atoms connected in the same sequence, but positioned differently in space.

Vitamin E acetate consists of EIGHT stereoisomers, only one of which is the same as natural Vitamin E (alpha-tocopherol). (4)

Synthetic vitamin E is added to foods as a stabilizing agent, so perhaps it is in vaping products to increase shelf life.

Fortified foods that contain vitamin E acetate are ultra-processed and should be avoided in favor of whole foods that contain natural E. When synthetic E is added to multivitamins and other supplements, it is a sign of a cheap product that is not going to enhance health.

For example, the most popular women’s multivitamin in the United States contains synthetic E listed as “alpha-tocopherol acetate”. Other competing brands that I checked also contain it.

**This form of vitamin E has NONE of the antioxidant properties of real vitamin E.

Research to date suggests that natural vitamin E plays a powerful role as an important antioxidant. Specifically, vitamin E is protective of free radical damage to the long-chain polyunsaturated fatty acids in cell membranes. Hence, it is critical to the healthy maintenance of these membranes so they can properly perform their designated functions.

Surprisingly, unlike deficiencies of the other fat-soluble vitamins, A, D and K, vitamin E deficiency does not typically produce noticeable symptoms.

Does this mean that vitamin E is unimportant?

On the contrary, while vitamin E may not act as a hormone directly like its more popular fat-soluble cousins, it plays a role in the release of every single reproductive hormone from the pituitary gland.

In animals, vitamin E deficiency reduces the production of follicle-stimulating and luteinizing hormones. These substances are critical to fertility and the health of the reproductive organs.

The most recent research found that delta-tocotrienol, one of the compounds in vitamin E, used in combination with Avastin, an FDA-approved drug, was able to stabilize and control ovarian cancer after surgery by 50% at six months.

Avastin alone was only able to control the disease by 25%.

Delta-tocotrienol used in combination with Avastin nearly doubled the survival of ovarian cancer patients after surgery. (5)

In conclusion, it is important to read the reports of the dangers of vitamin E acetate and its role in the development of vaping sickness with a critical eye. Headlines alone will not lead a person to the appropriate conclusion that:

Vitamin E acetate has no antioxidant properties and is completely different from natural Vitamin E.

Case in point. Synthetic E may contribute to vaping sickness when inhaled. However, excellent status of natural vitamin E may actually reduce the risk of lung cancer! (6)

While some fear that these reports that lump synthetic/natural Vitamin E together harm public health by turning people away from Vitamin E altogether, I think people are savvier than that.

I am hopeful that people will become more motivated than ever to read labels to identify the numerous foods and supplements they are buying that contain synthetic E.

If they stop buying these ultra-processed foods and cheap supplements in favor of whole versions, that is ultimately a big win for public health.

Perhaps these reports will move society further down the path of realizing that synthetic vitamins are not helpful to health and in no way equate to natural forms found in whole foods.