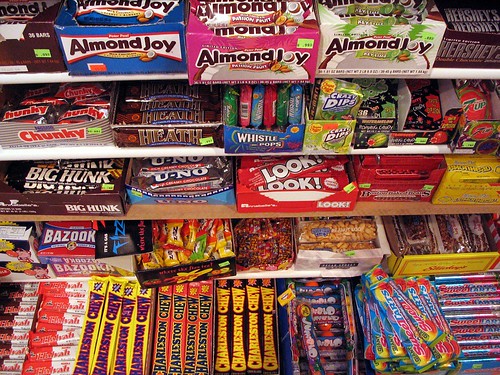 It seems like candy is everywhere all the time anymore – it doesn’t seem to matter the time of year!

Our culture is completely saturated with candy and sweets.  You simply cannot get away from it.  Every checkout line has a big candy assortment to choose from – even office supply and healthfood stores which is a strong indication that impulse buying of sweet snacks is very popular with most people.

Most children eat candy every single day, and sadly, it is even used as a reward in many classrooms or by parents themselves for good behavior or academic performance even if a child is clearly struggling with weight issues.

I feel that one of the most difficult things to teach children is moderation when it comes to their sweet consumption.   An occasional piece of candy is fine – eating it as a habit is most definitely not.

My policy in our house is simply not to buy candy.  We don’t have any candy laying around in our house as a general rule, although I do let my children have a small organic lollipop on the ride home from school some days.

Sometimes, I get so exasperated with how much candy is everywhere that I want to just keep my children home and never let them go out.  What particularly irks me is when another adult gives my children candy without asking me.

How rude is that?

Some days, don’t you just want to throw up your hands and lock your kids away or move to a closed community and live with only likeminded folks to get away from the sugar madness?

But, that doesn’t work either.  That is a surefire recipe for rebellion and a child who has no control over their sugar impulses.  The hard road is to continue to model moderation for them and let them have a bit of candy now and again and talk to them about how overindulging will lead to weight problems and worse in the years ahead.

I think of my own parents growing up.  They had an unlocked cabinet of various alcoholic beverages for special occasions or for when company might come to dinner.  Not one of their seven children ever broke their trust and as much as touched let alone drank some of that alcohol.  We were also always allowed to have a sip or two of whatever Mom or Dad was drinking on New Year’s Eve or whatever special occasion brought out the bubbly.

Not one of us today has an alcohol problem which I think is pretty incredible.  My parents successfully modeled moderation and for that, I am very grateful.

I think using alcohol as an example is important because sugar turns to alcohol in the body.  So, a child that grows up eating too much sugar can end up with an the same sorts of health issues as an alcoholic even if he/she never drinks a drop!

As a Mom who has been struggling to teach my kids the dangers of candy without being an ogre about it for many years, I wanted to pass along the story of how each of my children reacted to their school Easter Egg Hunt last week.

Of course, any Easter Egg Hunt is going to be loaded with candy and it is a good opportunity to teach children moderation and how to enjoy an activity without going overboard.

My oldest son who is a teenager, ate absolutely no candy at all.  He had no interest in having any and the pieces he got, he either gave away or tossed in the trash.

My middle child, who is three years younger, ate two pieces of candy and then dumped the rest in the trash.

My youngest child, three years younger than the middle child, ate a bunch of the candy at school and brought the rest of the candy home where she promptly dumped it in the trash after asking if she could keep 2 special pieces (which I said “yes” too).

It is important to note that my oldest child would have eaten a ton of candy when he was the age of my youngest child.   But, over the years, he has learned moderation more and more and now doesn’t want any at all (most of the time – not always).

My middle child had a really hard time saying no to candy if it was offered at school or a party just a couple of years ago.  Now, he is exercising great restraint and is demonstrating excellent moderation skills.   I know my youngest will be the same.  In another few years, she will be able to moderate herself just as well as her older siblings.

I guess the bottom line of this story is that it takes kids years to learn moderation in their candy habits especially when it is everywhere and most of their friends are pretty much eating it constantly so there is continuous temptation.  Teaching kids moderation with candy is clearly harder today than it used to be!

Learning to say no to candy is a process and just because a younger child has trouble with moderation today doesn’t mean this will be the case during the teenage years.

Stay on it, Moms and Dads!  Don’t give up as I’ve seen others do and just let your kids go wild with the sweets because it’s just too hard to stay on the moderation path 24/7.  Your efforts will bear fruit at a later time even if you are not necessarily seeing it today.

Why Vegetarianism is Not Healthy!

Why Can’t the FDA Just Call A Spade a Spade?