There are four prominent endocrine and metabolic disorders that not only contribute to obesity, but also make weight loss difficult. These conditions – “bad metabolism,” hypothyroidism, an underactive thyroid, and “adrenal fatigue” – are frequently misdiagnosed by doctors, or incorrectly self-diagnosed by patients. As a result, healthy people may think that they have them, while truly affected – may miss them. Both groups suffer needlessly. Let’s review some of the long-held misconceptions about this paradox.

The first misconception is about “bad metabolism,” and it is the most common, approaching a near 100% popularity. Medically and nutritionally speaking, it is a complete opposite. What you may think is “bad” is, actually, “good,” and here is why.

The truly “bad” metabolic disorders concern water balance and fluid volume; the balance of electrolytes (sodium, potassium, calcium, magnesium, and phosphate); acid-base regulation; disorders of carbohydrate metabolism, such as hypoglycemia, type 1 and type 2 diabetes, diabetic and alcoholic ketoacidosis; and lipid disorders, such as dyslipidemia and hypolipidemia [1].

These conditions affect people of all ages, genders, and body weights. Some of them are outright deadly, while others – such as diabetes or dyslipidemia – are chronic. Within the same group of conditions, some are associated with obesity, such as prediabetes and type 2 diabetes. Others, such as type 1 diabetes or diabetic ketoacidosis, result in profound and life-threatening weight loss.

Consequently, any time you mention “bad metabolism” in relationship to your weight, your doctor will know exactly what you mean, but may still chuckle at your misinterpretation. And if you continue insisting that you may have it, he or she may also tell you that when it comes to body weight, a true “bad metabolism”  is a sign of impending death, and that a precipitous weight loss, not gain, is one of its primary symptoms.

The emaciated gentleman on the left is Steve Jobs of Apple fame, shortly before his premature and unfortunate death. Take a hard look at this heartbreaking picture. That is what an actual “bad metabolism” – meaning the body’s inability to properly metabolize nutrients essential for life – really looks like.

Not so long ago, the dominant thinking and attitudes toward metabolism was a complete opposite. When my mother met my dad, a tall and handsome man with manners to match, she was short and moderately overweight, with big hips and large breasts, an ideal body shape for the 1950s. Single men would look at her thinking: “Gosh, this lady is so attractive! I want her to become my wife and the mother of my children.”

Today’s young men, conditioned by the Victoria Secrets’ standards, are more likely to pass over someone like my mother in favor of a waifish girl like Calista Flockhart (32A-23-30), who just three generations ago would have had a hard time finding a marriage partner because of prejudices typical for that era:

All of that primitive, misogynistic, and mostly unconscious thinking – to find a partner who will last you and your children through thick and thin – was, essentially, a basic “animal” instinct in action, honed over hundreds of thousands of years of pragmatic and merciless natural selection. 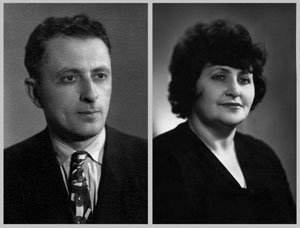 Naturally, that’s exactly what my father did without giving it a second thought – he married a woman with a good metabolism. He knew instinctively what my mom’s doctor told her after every check-up: “Polina, you have a fantastic metabolism!” For her generation it was an asset, not a curse. (The photographs of my parents on the right are from 1958, four years after my birth. They are, respectively, 43 and 37 years old).

True to form, my mother had an accidental pregnancy at the age of 45, while the usual rate of conception after age 40 is less than 5%. And that is after surviving the horrors of starvation and backbreaking labor during the four years of World War II as well as the devastation of postwar Russia.

Calista Flockhart, on the other hand, finally married actor Harrison Ford at the age of 46. In all probability, natural selection wasn’t on the mind of Mr. Ford, who at the time of their marriage in 2010 was already 68 years old. The couple is raising her adopted son Liam, who was born in 2001. Any way you look at it, the laws of evolution remain as tough today as they have ever been, even to someone as beautiful, talented, and famous as Ms. Flockhart.

So, if you too are endowed with a good metabolism just like my mother was, the problem isn’t with you, your genes, or your body, but with the times we are living – the sum of abundant food, minimal physical exertion, and all conceivable creature comforts is behind obesity epidemics on one hand, while the incorrect believe into “bad metabolism” causes many people to drop their weight loss diets too soon, or  discourages them from considering one in the first place.

THE TAKEAWAY: Since it’s too late to get another set of genes, or become a lumberjack, or give up comforts,  concentrate on the two factors that are still under your total control – what you eat and how your “burn” it! In fact, your “good metabolism” will work in your favor – the better it is, the faster you are going to lose weight.

The situation with thyroid-related disorders is a lot more complicated than with bad metabolism. A true “underactive thyroid” – a vernacular for subclinical hypothyroidism – affects up to 10% of women and 6% of men, many of them over 65 years of age. The rate of clinical hypothyroidism is under 1.2% of women and 0.4% of men [2]  predominantly among older adults, 33.3% of adult Americans are overweight and 35.9% are clinically obese, or 69.2% .

As you can see, the number of overweight people is significantly greater than the number of people affected by subclinical or clinical hypothyroidism [3], even though many people who are affected by adiposity ­­­– a shorthand for “overweight or obese” – believe they may have this condition because of weight loss resistance or weight gain on a moderate diet.

On the opposite side of the spectrum, there are people who are misdiagnosed and untreated because both conditions are challenging to manage even to specialists. According to The Merck Manual of Diagnosis and Therapy, the early stages of this condition are associated with the following symptoms:

“…cold intolerance, constipation, forgetfulness, and personality changes. Modest weight gain is largely the result of fluid retention and decreased metabolism. Paresthesias [tingling  – KM] of the hands and feet are common, often due to carpal-tarsal tunnel syndrome…[4]”

Please also note one significant detail in the above quote: “Modest weight gain is largely the result of fluid retention…”  This explains why some people who are affected by this condition can’t lose weight even on a very low calorie diet – most of that extra weight comes at the expense of water, not body fat.

Women with hypothyroidism may also be affected by menorrhagia – an abnormally heavy bleeding during menstruation, or amenorrhea – an abnormal absence of menstruation. If you are experiencing any of these symptoms, get evaluated by a board certified endocrinologist.

Because clinical hypothyroidism isn’t as common as some other disease, non-specialists may not be able to properly diagnose and treat you, especially during the earlier stages while the symptoms are still subtle, and the tests aren’t as definitive. If your diagnosis or treatment outcomes are  not satisfactory, you may also consider working with alternative providers.

Things get even more complicated with Hashimoto’s thyroiditis, also known as chronic lymphocytic thyroiditis. It is an autoimmune inflammatory condition of the thyroid. In addition to the transient symptoms of hypothyroidism during early stages, it is distinguished by painless enlargement of the thyroid gland, and, in some cases, a feeling of fullness in the throat. It may or may not be associated with adiposity.

If you suspect that you may have Hashimoto’s thyroiditis, GET TESTED. The level of thyroid hormones T4 and TSH may remain normal during early stages, making its diagnosis difficult in non-specialized clinical settings. Seek out a specialist trained in diagnosing and treating this relatively rare condition. 1 case in 1,000 is, indeed, rare for an internist who treats on average 2,000-3,000 patients a year, and may not encounter a single patient with Hashimoto’s in years.

I do not recommend commencing any type of weight loss diet until you are properly diagnosed and treated for hypothyroidism. A reduced calorie diet may deny your body from getting essential nutrients, and may exacerbate the progression of the disease. Besides, it isn’t likely to be effective anyway because of fluid retention.

THE TAKEAWAY: Do not rely on outdated misconceptions about clinical and subclinical hypothyroidism. If you are experiencing any symptoms related to either condition, seek out the best treatment money can buy. Continuous weight gain in healthy people isn’t always a symptom of hypothyroidism.  As epidemiological statistic – however flawed it may be – demonstrates, the majority of people with adiposity are not affected by hypothyroidism. If you are in  this fortunate majority, you earlier failures to lose weight weren’t related to bad health, but to bad diets.

What you may think is “adrenal fatigue” endocrinologists call primary or secondary adrenal insufficiency. Both conditions are ascertained by a blood test, and treated, when necessary, with appropriate medication.

Primary adrenal insufficiency – also known as Addison’s disease – is a hard to miss condition because it is accompanied by severe skin pigmentation. Its prevalence – a medical term for the number of affected people – is less than 1 person in 14,000  (<0.007%) in population [5]. Just like truly “bad metabolism,” it causes weight loss, not gain:

“The slowly progressive loss of cortisol and aldosterone secretion usually produces a chronic, steadily worsening fatigue, a loss of appetite, and some weight loss. Blood pressure is low and falls further when a person is standing, producing lightheadedness. Nausea, sometimes with vomiting, and diarrhea are common. The muscles are weak and often go into spasm. [6]”

If you have any of the above symptoms, get tested immediately. This debilitating condition can be well controlled with medication.

The prevalence of secondary adrenal insufficiency is less than 1 person in 3,600, or 0.027% of the population. The symptoms of this condition are similar to Addison’s disease, but without pigmentation. Again, a blood test is required to screen it out and receive an appropriate and effective treatment.

A popular opinion exists that this condition may be substantially underdiagnosed. It may very well be correct, so let’s assume that there are 100 times more people affected by secondary adrenal insufficiency than what epidemiologists are telling us. Alas, it still comes to only 2.7%, a drop in the bucket next to 69.2% of the population with adiposity.

THE TAKEAWAY: Just as with “bad metabolism” and hypothyroidism, don’t rely on outdated misconceptions about “adrenal fatigue” and its relations to weight loss or gain. Seek out expert help to screen out primary and secondary adrenal insufficiency, and, if necessary, obtain adequate treatment.

[5]   Division of Medical Sciences, University of Birmingham, and Department of Medicine, Endocrine and Diabetes University of Wurzburg, “Adrenal Insufficiency,” Lancet, 361 (2003): 1881-93; [link to PDF]

Previous posts from  the “Why Diets Fail?” series:

1. The Real Reason Diets Fail and What You Can Do About It

2. How Long Will It Take Me to Lose the Weight?

For your health and safety, please read these important Weight Loss Common Sense Warnings and Disclaimers before commencing a reduced calorie diet.

Konstantin Monastyrsky holds a degree in pharmacy from the National Medical University in Lviv, Ukraine. He is an expert in forensic nutrition and has written four books about health and nutrition, including the acclaimed Fiber Menace. He’s twice been a featured speaker at the International Wise Traditions Conference.

Cinnamon for Weight Loss. Does it Work?