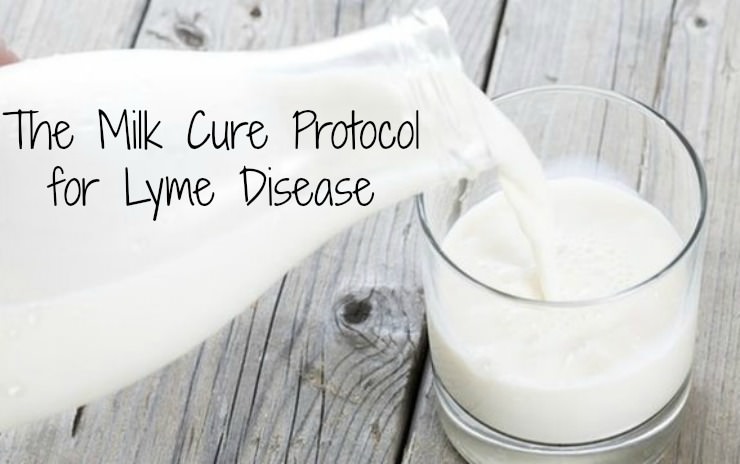 This amazing story was sent to me by Melanie, a Mom who, for over 100 days, fasted on nothing but raw milk to heal Lyme Disease.

No other Lyme Disease treatments, conventional or otherwise, have worked for her over the past 4 years.

Her healing journey is based on the use of raw, pastured milk for reversal of serious illness as practiced in the early 1900’s by the Mayo Foundation, a forerunner of the famed Mayo Clinic in Rochester Minnesota.

If this story is of interest to you, read more about The Milk Cure 2012.

From Normal Mom to Near Invalid

Four years ago I was an active wife and mother: cooking, cleaning, running errands, volunteering at my daughter’s school — the usual “stay at home” mother activities. Without warning, I suddenly became very ill after being exposed to loud noise for several hours.

I developed excruciating pain in both ears and was subsequently diagnosed with “hyperacusis”, painful sensitivity to sound. I could not bear any noise louder than normal conversation without intense pain and became confined to my home. At about the same time, I began suffering from severe insomnia and night sweats, and I began to rapidly lose weight.

I developed muscle and joint pain over my entire body, and my muscles became so weak that I could not turn on the shower or lift a glass of water to my lips. Eating was painful because my stomach hurt, and my muscles twitched so badly it made the bed shake. For months my face was swollen and I developed spontaneous bleeding underneath my toenails causing them to turn black.

Inexplicably, my body seemed to be “falling apart”!

After having numerous diagnostic tests I was told my blood was too thin, my blood sugar was too high, I had no detectable good bacteria in my intestines, and my body had an extremely high level of an enzyme with a long name we’d never heard of before. My immune system was so dysfunctional that I tested allergic to nearly 80 foods. After seeing many specialists to determine what was wrong, I was finally diagnosed with lyme disease, a chronic debilitating infection caused by a tick bite.

During those months while we awaited a diagnosis, different doctors had prescribed various medications and synthetic vitamin supplements to treat my symptoms. Although we did not understand why at the time, all of them made me terribly ill and I was forced to discontinue taking anything (in hindsight that was a great blessing, as we would later learn those unnatural substances were only adding to the toxic burden on my body.)

We were grateful to have a diagnosis of Lyme Disease but knew that, in my weakened condition, I could not tolerate any medical treatment. With no good options and my physical state rapidly worsening, we did the only thing we knew to do: called the elders of our church to come anoint me with oil and pray for my healing. Knowing that Jesus had said, “The truth will set you free”, I set out to discover his truth for my physical body. What was the underlying cause of my illness? Why was my immune system so weak? How could my health be restored? What did he want me to eat? In my search for the truth, the answers to those questions would change the course of my life.

One of the first things I learned was that, whatever the diagnosis, there really is only one chronic disease — toxicity and nutritional deficiency. Basically, my body had become overloaded with toxins and was unable to function properly. Just as there was only one disease, there was only one cure. I needed to eliminate (as much as possible) the toxins coming into my body, cleanse my body of stored toxins, and provide it with the nutrients it needed to repair and rebuild.

Since I would not be taking medication or supplements, food would be my “medicine”.

After much research, I cut out many things from my diet in a quest to quell my Lyme Disease symptoms : additives, preservatives, artificial flavorings and colorings — basically all processed food. I also eliminated soy, gluten, yeast and sugar. I ate only what was organic so as not to ingest pesticides. Over a period of two years I experimented with eating different foods that were supposed to have healing qualities: goji juice, acai powder, coconut oil, raw garlic, cultured vegetables, freshly made vegetable juice, raw apple cider vinegar, manuka honey, non-gluten grains soaked overnight, sea vegetables, grass-fed beef, sea salt.

For months I ate six raw egg yolks a day from a local farm. I consumed gallons of raw coconut kefir and homemade bone broth. I ate dozens of jars of raw nut butter and grass-fed ghee and drank only spring water.

After more research I learned that, even with my new eating plan, I had still been unknowingly pouring harmful chemicals into my body on a daily basis through toxic personal care items. I threw out all my health and beauty supplies and used only a bit of pure castile soap on my skin and hair. I discarded my household cleaning and laundry products and instead used vinegar, baking soda, and a dried fruit called “soapnuts”.

I replaced our teflon pans with non-toxic ceramic, and our plastic containers with glass bowls. I had a water filter installed in the shower and opened windows to air out our home. I bounced on a rebounder for half an hour each day to flush out my lymph system, and twice a day took a walk in the sun until my legs became too weak to continue.

With the elimination of many toxins and a complete change in diet and lifestyle, I did see some improvement. I could finally sleep, my pain lessened somewhat, and a number of my symptoms disappeared. I was able to start taking a plant-based digestive enzyme, hoping it would help my stomach.

Still, I continued losing weight and was unable to regain my strength. My hair started falling out and I continued to have serious digestive problems. Despite eating large quantities of food, by last summer I had lost more than one-third of my starting weight.

Through my research, I had repeatedly seen how drinking raw milk had helped many people, but since I had such trouble digesting fats I had avoided it. Then I read several articles from the early 1900’s describing how doctors had used an exclusive raw milk diet to successfully treat every sort of disease. It was described as “a combination of a detoxifying fast and nutrient-dense feeding” — just what I needed.

I also read that fasting gives the digestive system a break so that all the body’s energy can be devoted to healing. Based on my research, and since it was becoming increasingly difficult to digest solid food, I decided to try the raw milk fast for 90 days or as long as I could tolerate.

I located a farm with raw milk about 20 minutes from our home. It is not certified organic although they claim to use many organic practices. The cows are grass-fed much of the year and eat hay in the winter. Although their diet is supplemented with a small amount of non-gmo corn and the milk is sold in plastic containers, it was the best we could find locally. Having little to lose, I decided to proceed with my plan.

I began my fast on November 18, 2011, and from the beginning have been drinking about three quarts of milk per day in my quest to cure Lyme Disease.

Some of it I make into kefir. The rest I let sit out on the counter for 12-24 hours to come to room temperature (cold foods are bad for my digestion) and begin a natural souring process that increases the beneficial bacteria. I drink about six ounces every hour, sipping it slowly and mixing well with saliva.

I take part of a digestive enzyme capsule with it – this is probably not necessary, but I was reluctant to stop using the enzymes since they had seemed to help me digest fats. I usually drink my last cup of milk around 8 p.m. and then go to bed since I know the body repairs during sleep.

Since beginning the fast, I have experienced many common healing reactions: skin eruptions, itching, runny nose, headache, increased muscle and joint pains, sweating, body odor, gas and bloating, constipation, dry mouth. For two days the glands in my neck were so swollen that is was hard to swallow, and for several weeks I coughed up green mucus every morning. Some days I have had a strong chemical taste in my mouth. The past couple of weeks my legs have ached badly on several occasions making it difficult to stand and walk. None of these symptoms has concerned me, for I know that my body is flushing out toxins and ”cleaning house”.

Now for the good news: after four years of my body wasting away, I have gained 25 pounds and am back to a normal weight for my petite frame. My hair has stopped falling out, my pain is gradually lessening, and I am slowly regaining my strength.

My sickly yellowish complexion has been replaced with a healthy pink glow!

How long will I continue my fast? I do not know. I trust that the Lord will lead me to know when and how to re-introduce solid food. Until then, our family thanks Him daily for the healing power of raw milk!

Posted for Melanie by Sarah, The Healthy Home Economist

Maca: Is this Incan Superfood Possibly for You?

Where to Buy Epsom Salt. Supermarket, Pharmacy or Healthfood Store?