How to separate cream from non-homogenized whole milk that is either raw or pasteurized. This budget-friendly option includes a one-minute demonstration video. 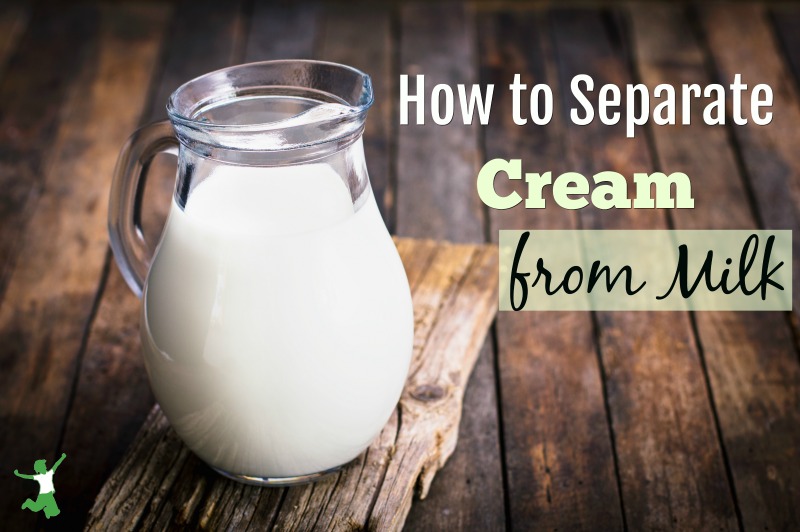 Cream is, without question, the most nourishing portion of dairy milk. Healthy ancestral societies revered butter hand-churned from cream that came from cows grazing on the rapidly growing spring grass.

Children that consumed it were robust and intelligent. For the elderly, this ancestral food helped preserve health and mental acuity. (1)

Cream is where the fat-soluble vitamins are…true Vitamin A and D.

The elusive MK-4 short-chain menaquinone of Vitamin K2 is also present but ONLY if the cows are free to roam and graze on thick, green pastures. Hence, cream from conventional grain-fed cows contains none.

Sadly, only the most educated consumers realize the importance of good cream in the diet. The ones who put their faith in the misguided Food Pyramid are still buying nonfat yogurt, fake butter spreads, and skim milk, which paradoxically encourages weight gain.

The Case of the Disappearing Cream

Unfortunately, full fat, raw or low temp pasteurized cream is one of the casualties of a monopolistic dairy industry that favors shelf life over quality.

Ultrapasteurized cream is the typical and frequently the only option even amongst organic brands at the health food stores. UHT cream is so heavily processed that it is no longer healthy to consume.

Beware! UHT cream is so denatured that the body must mount an immune response as it attempts to deal with it digestively.

To get good quality grass-fed cream, it is usually necessary to seek out a small local dairy that is within driving distance of your community.

Sometimes, an independently owned health food store (in other words, the owner lives in the same community), is educated enough to stock this type of cream on its shelves.

However, the global pandemic has caused this type of cream to be extremely hard to find in some places. Grassfed butter is even more difficult to source in recent months.

Hence, if you want cream, separating it yourself to make butter or simply to add to coffee and tea is now a necessary and routine task. Fortunately, it is quite simple if you know what to do!

In order to separate cream from milk, first and foremost, the milk must be full fat and non-homogenized.

Homogenization is a violent factory process that forcibly reduces the cream globules in cow milk to a fraction of their original size. This allows the cream to evenly disperse in the milk, effectively eliminating the natural cream line.

Homogenization of cow milk became widespread in America in the 1930s and nearly universal in the 1940s. (2)

Thus, most people have never even seen a gallon of cow milk with the cream line intact.

Fortunately, it is becoming more widely available with the proliferation of cream top milk in recent years.

Cream top milk may or may not be pasteurized.

Ultimately, it doesn’t matter too much, as standard lower temperature pasteurization doesn’t damage the cream (it destroys the rest of the milk though!). Hence, you can separate cream from either raw or pasteurized, nonUHT milk as long as it is non-homogenized.

Other Types of Dairy

The cream from goat milk and sheeps milk cannot be easily separated at home. This is because they are naturally homogenized.

In other words, there is no discernible cream line on this type of milk even if it is raw.

Separating cream from camel milk is also not doable. Camel milk has so little cream that taking the time to separate it isn’t worth the effort.

If you want to separate cream, stick with cow milk!

Breeds of Cows that Produce the Most Cream

Another suggestion is to seek cream top whole milk that comes from old fashioned cows like Jerseys, Devon, or Guernseys.

I recommend that you avoid whole milk from Holstein cows.

Holstein cows produce very little cream. The creamline is so small, in fact, that once you remove some, the milk you are left with is basically skim and who wants that?

If you remove some cream from jersey whole milk, on the other hand, you will still have more cream left in the milk than would be in full fat Holstein milk!

How Much Cream from a Gallon of Whole Milk?

I typically remove about a cup of cream per gallon of whole milk.

I don’t try to get every bit of cream because I want to leave some in the milk so it is still good for drinking and other purposes like making 24 hour yogurt and kefir.

The best news is that there will be enough cream left in the milk that it will still be “whole milk” by conventional standards. This is because milk from conventional Holstein cows contains little cream, as discussed in the previous section. 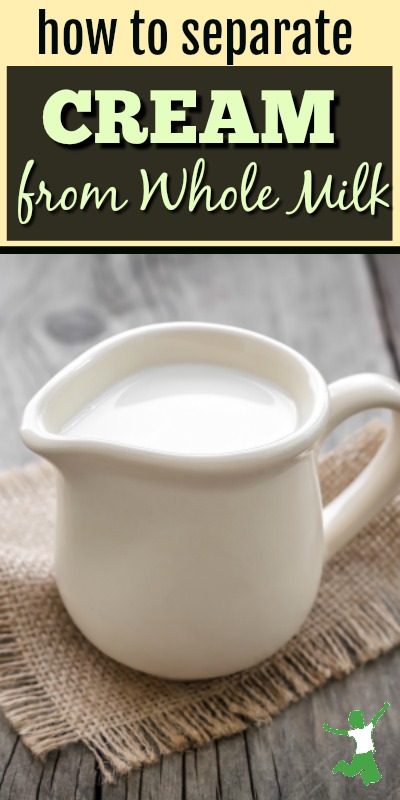 Steps for Removing Cream from Milk

The video below demonstrates the process.

Have you ever removed the cream from whole milk? Did you use this method or try another approach?