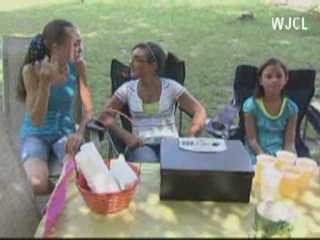 Now comes a story out of Midway, Georgia of police shutting down a girls’ lemonade stand for lack of a business license, peddler’s permit, and a food permit.

The permits cost  $50 per day (or $180 per year), making selling lemonade a money losing proposition for the children who were only trying to raise money to go to a water park.

The lemonade stand was in operation for one day before police had the gall to shut the poor children down, whom I have no doubt were traumatized by the event.  Midway Police Chief Kelly Morningstar said police were concerned with how the lemonade was made, what was in it, and who made it.

Is this too difficult for government officials to comprehend?

I guess this explains why the government prefers children to go to fast food restaurants serving government approved franken fare made in factories that barely qualifies as food in most cases.

But hey, fast food establishments have all their permits in order so they are a-ok.

I myself operated a lemonade stand when I was a child to raise money for various summer activities.   I can’t even imagine a police officer telling me I was breaking the law and that I had to stop.  My neighbors certainly would have protested against such idiocy since they always enjoyed and supported children in the neighborhood taking on such projects over the summer that brought the community together.

It seems that in Georgia, which not so coincidentally suffers from a high obesity rate, children should be inside during the summer watching TV or playing video games instead of outside, interacting with the community, learning simple business skills and putting their arithmetic to practical use with a simple lemonade stand!

High Time for the Return of Civil Disobedience?

This government harassment of normal, everyday activities by citizens has simply got to stop. I hope the people of Midway, Georgia express their outrage to the local authorities.

Perhaps the cutting of local and state government budgets across the country will have a silver lining over time .. fewer government workers and increasingly cash strapped budgets may mean less – or even a cessation of this stupid type of government behavior.

In the meantime, it could be high time for some well placed Civil Disobedience.  Citizens need to stop rolling over on this stuff.  Would the police dare to cuff a Mom or Dad who told them to get lost or come back with a warrant if they tried to shut down their children’s lemonade stand?