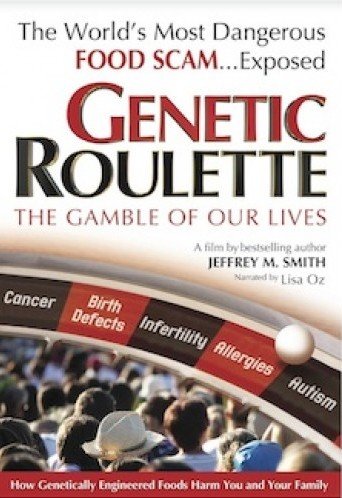 I first saw Jeffrey Smith speak in a small, cramped Holiday Inn ballroom in Clearwater Florida back in 2003.  His brand new book Seeds of Deception (now a best seller) had recently been released and Jeffrey’s talk that night primarily revolved around describing to a wide eyed and horrified audience the insidious proliferation of genetically modified foods that had just begun to invade our food supply.

My friend Brenda was with me (we were early raw milk warriors together) and I remember so clearly sitting completely dumbfounded as Jeffrey thoroughly and precisely described the process by which genetically modified organisms are created in the lab and the internal damage they can wreak on humans and animals alike.

I was absolutely thrilled and honored to be a guest along with Jeffrey on Sean Croxton’s Underground Wellness radio show a couple of months ago as part of the Real Food Summit.  I was even more excited to learn that Jeffrey will give the closing address at the Wise Traditions Conference November 9-11, 2012 in Santa Clara, California.  Wild horses couldn’t keep me away.  I hope to see some of you there too.  Jeffrey is a compelling and eloquent speaker.  You will not be disappointed if you make the effort to attend.   The results of the Proposition 37 vote will be known at the time of Jeffrey’s talk that day, so hopefully it will turn out to be a raucous celebration of victory!

Jeffrey has recently released another stellar work, the documentary Genetic Roulette – The Gamble of Our Lives.

“The evidence presented in the film makes the best case yet for why genetically modified organisms (GMOs) are linked to disorders such as allergies, inflammatory bowel disease, infertility, autism, and cancer, to name a few. One health practitioner, Mary Tobin, L.Ac., said the film “provides abundant evidence that eating a GMO-free diet is the single most important change Americans can make for their health.”

** You can view this important film for free for this week only:  September 15-22, 2012.  So, clear away 1 hour and 24 minutes from your busy schedule this week and sit down and watch it, preferably with your spouse and kids if you can.  Our children need to know about this too as our actions today will most impact their generation.

Please, if you have the means, consider donating to the campaign to require the labeling of GM foods that is currently on the ballot for the November election in California.  If California requires GM labeling by approving Proposition 37, the rest of the country will most likely follow suit so this California initiative has implications for us all!

It is shocking to me that in less than 10 years since the night I first heard Jeffrey speak about the dangers of GM foods, these frankenfoods have made their way into almost every processed food on the shelf.   We must stop this NOW.   Please watch the documentary and donate to this important cause for our children’s sake.