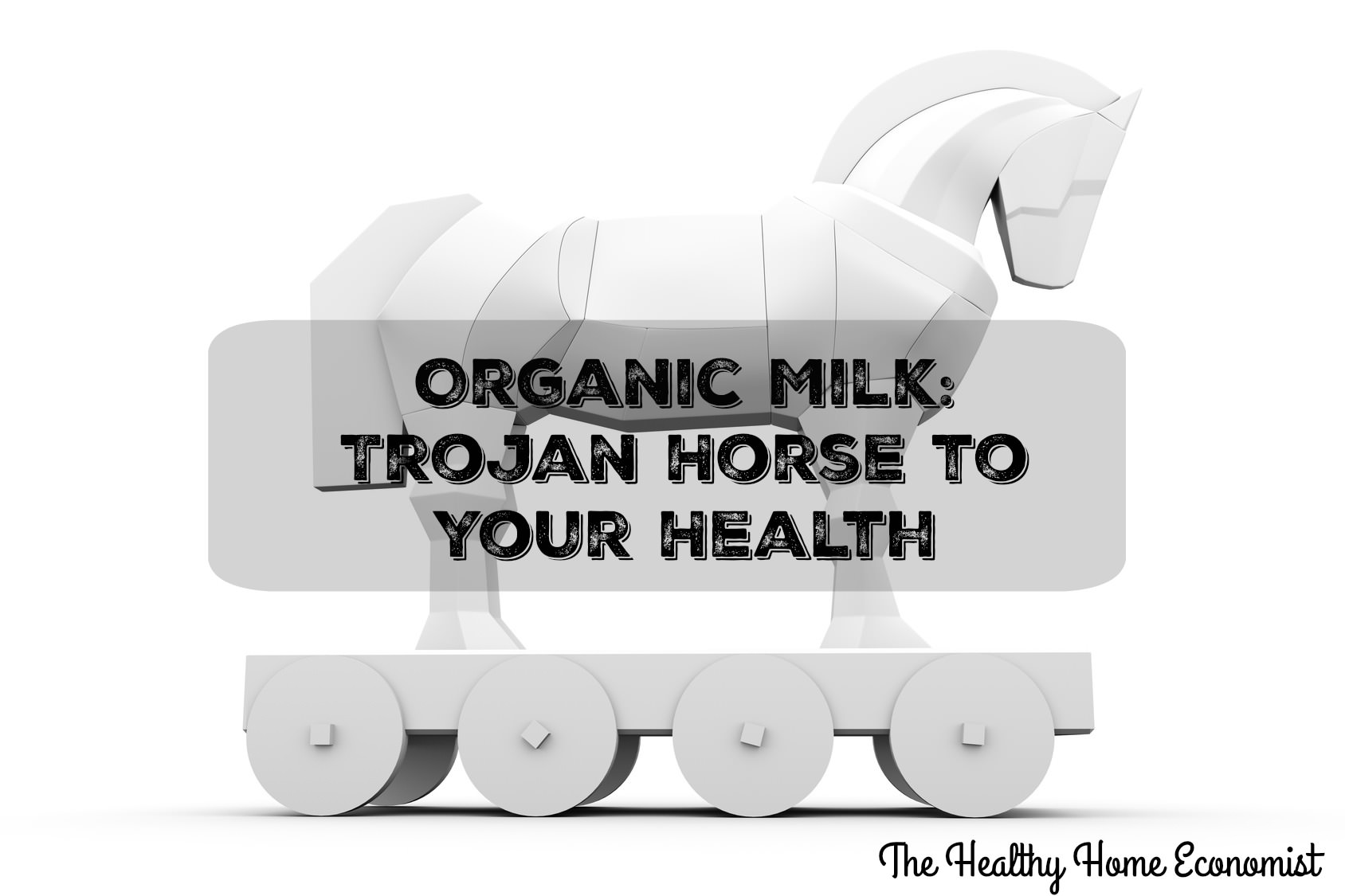 Fact: Organic milk companies are pulling to wool over the eyes of the consumer to boost profits.

Pasteurized Store Milk:  Clearly Not Good for You

On the one hand you have regular, pasteurized store milk that comes from sick, confined cows that are injected with hormones and other drugs.  The cows are fed unnatural, GMO, pesticide and antibiotic laced feed with no access to fresh air or green grass. These poor animals stand on cement floors their entire lives. No surprise that they usually die within about a year and half. Incidentally, the true lifespan for a healthy dairy cow should approach 15 years.

While the cows producing organic milk may not be subjected to the drugs and antibiotics used on conventional dairy operations, the milk coming from an organic-industrial complex is even more highly processed. For example, ultrapasteurized (UHT) organic milk must be subjected to a temperature of 280F for at least 2 seconds. This compares with standard pasteurization temperature of about 161F. Such a high temperature results in a product that has extended shelf life. UHT milk can remain unrefrigerated for up to 6 months in aseptic packaging.

When this happens, the enzymes the body produces to digest these proteins do not work as they no longer “fit together” like puzzle pieces. The undigested proteins then make their way into the bloodstream due to “leaky gut” syndrome, which nearly all Westerners suffer from to some degree. At that point, the body identifies them as foreign proteins and mounts an immune response. This translates into symptoms better known as allergies, asthma, eczema and other symptoms of auto immune disorders! Ultrapasteurized milk is so completely sterilized that sometimes it cannot even be cultured into homemade kefir or yogurt.

The enhanced immune response that occurs from drinking ultrapasteurized milk has the potential to lead to milk and dairy allergies pretty quickly. I remember when my first child was nursing, I drank a lot of  Organic Valley ultrapasteurized milk.  My son spit up so badly during that time that there was some concern that he had a reflux disorder.   Remarkably but not surprisingly, when I stopped drinking the Organic Valley milk, his reflux problem resolved.    I have no doubt that if I had continued drinking this milk and had weaned my son onto it  that he would undoubtedly have a milk allergy today.  Fortunately, I wised up in time to get off that poison!

While a consumer may be reducing his/her exposure to antibiotic and pesticide residues by choosing Organic Valley milk, this is by no means a guarantee to less chemical exposure.  Processors of organic milk frequently heat the milk to the required 270F AFTER the milk is in the aseptic package or plastic jug!Another option, just as bad, is to fill the package or jug with boiling hot milk that has not yet cooled down! This releases high levels of endocrine disrupting phthalates (the notorious BPA as well as several others) used in the packaging into the milk! Most everyone now knows never to heat food in a microwave with plastic wrap on top for this very reason. It’s a shame more people aren’t aware of the tremendous endocrine disrupting potential of drinking ultrapasteurized, organic milk!

What to Drink Instead of Organic Milk

Better not to have to make the decision at all! Seek out fresh raw grassfed milk straight from the cow (or goat) from a farmer in your local area. And, if you are fortunate enough to have a source for this type of health giving milk, don’t run out and buy a half gallon of ultrapasteurized organic milk if you temporarily run out of the fresh from the farm variety. In those situations, it is best to simply go without. The risks from consuming UHT organic milk even on occasion are simply too enormous to ignore.

Another option is to make healthy milk substitutes like this recipe for coconut milk tonic until the next local dairy delivery.

Tips for Freezing Milk and other Dairy Products

Should Babies Get Cod Liver Oil?
Next Post: Choosing the Best Healthy Salt (plus video)