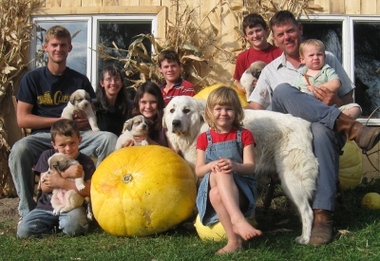 I first met Mark and Jill Baker at the Speakers’ Dinner at the 2012 Wise Traditions Conference in Santa Clara, California.  Mark, Jill and I sat at the same table that evening and the three of us along with several other folks stayed up long after dinner had finished talking about a wide range of topics related to the growing local food movement in America.

Mark and Jill are the kind of family you would want living next door. Honest and hardworking with 8 beautiful children, the family works together to run Baker’s Green Acres, a small, peaceful, local farm in Marion, Michigan – a jewel of their community.

Mark and Jill started Baker’s Green Acres 10 years ago after Mark retired after 20 years serving his country in the US Air Force. Unfortunately, the country he put his life on the line to protect has not afforded him the freedom of life, liberty and the pursuit of happiness he thought he was defending.

Any Pig Living in the Open Air Deemed “Feral” and “Illegal”

The problems all started back in 2010 when the Michigan Department of Natural Resources (DNR) issued the Invasive Species Order, approved by the governor, which banned all heritage pigs.

The DNR order is intentionally ambiguous in its description of what it calls “feral” pigs.

Ambiguity renders power, essentially allowing the DNR to shut down any hog farmer it chooses.

In essence, any pigs were deemed illegal if not living within a Concentrated Animal Feeding Operation (CAFO), those huge, abhorrent industrialized farms run by Big Ag where unspeakable acts of animal cruelty, filth and negligence take place behind closed doors and beyond the prying eyes of the public.

Yes, this is what is happening today – right NOW – in the United States of America.  Sounds more like the Soviet Russia we learned about in history class where people could be locked up for having a backyard garden!

In what no doubt took an incredible amount of courage, Mark and Jill decided to defy the DNR order.

They have sued the state of Michigan seeking to prove in court that the Michigan Pork Producers Association is the initiator of the law classifying all non-CAFO pigs as a “feral” invasive species.

Mark’s belief is that the growing popularity of heritage-breed meat and poultry threatens the factory farming, industrial confinement model.  Big Ag will stop at nothing to eliminate the competition while still in its infancy stage but growing rapidly.

According to a recent interview with Food Riot Radio, Mark said:

“If they can issue a declaratory ruling that says anything with a straight tail or curly tail is an illegal pig, and neither the governor, the legislature or the courts say ‘hey wait a minute,’ then what’s to stop them from issuing a declaratory ruling that says any cow that is brown is feral and must be disposed of, or any chicken that is not raised in a hen house is a feral chicken?”

“Industrial agriculture wants all the market share. They want all the small farmers off the land, and they want to own the entire food production model.”

“Our little pig thing is a microcosm of what’s going on nationally. If we let Big Ag win, it will be a grim future for our children and grandchildren. We’re all in this together.”

Through his courageous stand for Food Freedom, it seems that Mark Baker is helping to secure the continued right of Americans to pursue life, liberty and the pursuit of happiness as they see fit more as a farmer than he ever did as a soldier.

Mark and Jill’s case against the state of Michigan to overturn this order has cost their family dearly.

This family is at the end of its rope financially – the state is seeking fines of $700,000 and has impaired their ability to sell food from the farm – literally trying to starve them out and put them on the street with continued delay tactics. The last I heard, even their power had been cut off.

“There are plenty of us [farmers] that are fighters, perpetual warriors, but we don’t have ammunition to put this fight on. So we’re looking to other Americans and saying please give us some ammunition, and that’s money, U.S. dollars. You can pray for me and pat me on the back and that’s great, but if I can’t pay lawyers to do their job, it doesn’t happen. And I’m at the end of my rope right now, and I need help. There it is — I need help.”

Can you please help them? Donations of any size would be a blessing. It is farms like Baker’s Green Acres that must be saved for a future to exist where our children and grandchildren have the right to choose food to nourish themselves from the local farms of their choosing – free from an industrially produced model.

The hopeful news is that a court hearing is finally coming this month with a celebration of the farm to follow.  If you live anywhere in Michigan and can support them at the court hearing or farm event, here are the details:

Food Freedom is the civil rights movement of our time.  Let’s all stand together as modern day Patriots to support Mark and Jill and help them set an important precedent against the bureaucratic food terror being wreaked against local farms producing the type of food we need and our children deserve to live a long, healthy life.