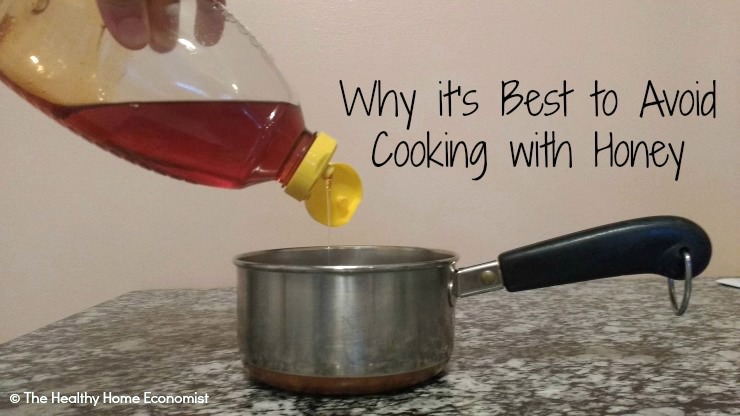 Switching to honey from refined sweeteners is a common first step for many who seek to improve their diet and overall health. This would include baking and cooking honey for recipes used in the home.

Certainly, honey is the most traditional superfood that is praised in ancient texts and a component of numerous traditional diets from around the world. Modern science has verified the health benefits of consuming honey as it contains vitamins, minerals, probiotics (Lactobacillus kunkeei), enzymes, antioxidants, and some amino acids.

Honey in its raw state is also helpful used on the skin and as medicine due to the potent anti-microbial properties that make it useful as a natural antibiotic.

Those who use honey generally seem to understand that it is best to seek it in an unheated (raw) state to obtain maximum benefits. However, what most do not know is that cooking honey or baking with it – even simply adding honey to hot liquids causes negative chemical changes to this ancient food. In fact, consuming honey that has been heated or cooked in any manner actually can contribute to ill health particularly of the digestive system.

Honey is regarded as essential medicine and food in Ayurveda, a 5,000-year-old system of traditional diet and holistic healing that has its origins in the Vedic culture of India. Tibetan medicine and Traditional Chinese Medicine both have their roots in Ayurveda. In addition, early Greek medicine embraced many concepts originally described in the classical Ayurvedic medical texts dating back thousands of years.

In Ayurveda, honey is considered an important food for the health of the heart and the eyes. It is also considered the only natural sweetener appropriate for those trying to lose weight because it warms the body (i.e., stimulates metabolism) rather than cooling it like other natural sweeteners. Along these lines, a popular and recommended weight loss tonic for those who follow an Ayurvedic diet is a small amount of raw honey in a cup of warm (not hot) water first thing in the morning to stimulate strong metabolism for the day.

While Ayurveda recognizes the many dietary and holistic benefits of honey, the dietary principles of this ancient system of health also strongly advise against heating it for any reason. The reasons are both practical and health-related.

First, Ayurveda claims that heating honey to 104°F/ 40°C or above causes a negative chemical change that causes it to become bitter. This makes it undesirable to use from a culinary perspective in comparison with other natural sweeteners like unrefined cane sugar or fruit.

In addition, Ayurvedic dietary principles warn that consuming honey that has been cooked, baked or added to hot liquids contributes to ill health over time. The reason is that honey when cooked, becomes glue-like.

The molecules then tend to adhere to mucous membranes in the digestive tract producing toxins, called ama. The literal meaning of ama is undigested food or toxins stuck within the digestive tract. It is considered to be the root cause of most ill health in Ayurveda with heated honey one of the most difficult forms to detoxify.

Charaka, the ancient sage of Ayurveda, wrote over 500 years ago that “nothing is so troublesome as ama caused by the improper intake of honey.”  (1)

Dr. Krishna, an Ayurvedic practitioner for over two decades explains further that even raw honey should not be mixed with hot or spicy foods as this will by default make it “hot”. In addition, he advises against using raw honey in a hot environment where you are already warm and possibly overheated (2).

At this point, we’ve established that the ancient system of Ayurveda considers uncooked honey to be nectar and cooked honey as poison. But, what does modern science have to say on the subject?

Science confirms that heating or cooking honey does indeed damage it, thereby eliminating many of its beneficial effects. This is alarming given that the vast majority of honey available in the grocery store has already been heated whether or not you decide to cook with it at home!

The most obvious change to heated honey is a loss of enzymes and probiotics. Research puts the temperature at which damage occurs higher than Ayurveda. Rather than the Ayurvedic limit of 104°F/ 40°C, heating honey to 118°F/ 48°C or above is the point at which negative chemical changes begin to occur. Foods heated above this critical temperature, even if only for a very brief period, are said to be cooked, or more aptly put — dead.

You can test this for yourself very easily if you are so inclined (be very careful!). Heat a pot of water on the stove to 117°F/ 47°C and notice how you can stick your finger in it without burning yourself. The liquid is very hot, but not burning. Beware if you heat the water just a degree higher to 118°F/ 48°C, however, as it is now at a temperature that will burn your finger very quickly if you attempt to touch it.

Most problematic, a significant rise in hydroxymethyl furfuraldehyde (HMF) occurred at only 140°F/ 60ºC in the heated honey samples. The negative effects were more pronounced when the heated honey was mixed with ghee leading the study authors to conclude that the increase in HMF “may produce deleterious effects and act as a poison in due course” (3).

The good news is that feeding rats the mixture of heated and raw honey mixed with ghee for 6 weeks showed no significant change in the food intake, weight gain, and relative organ weights. Other research, however, suggests the potential toxicity and carcinogenicity of HMF in humans, although at the present time, not enough research on the subject exists to definitively link intake of this chemical with ill health (4).

In my view, the most telling evidence that we should think twice before cooking honey or consuming it after it has been heated comes from beekeepers themselves. It is known that honey is the winter food for bees, so consumption of it within the hive is a normal and natural occurrence in nature. However, beekeepers who have heated raw honey and then given it back to their bees as food have observed that this practice can be deadly.

The most prominent example of this comes from P. J. Chandler, a pioneer of natural and sustainable beekeeping. He writes that bees fed heated honey perish (5).  This is likely due to the increase in HMF that occurs when honey is heated, as this chemical is toxic to bees.

A similar pattern emerges when calves are fed pasteurized rather than raw milk. They end up sickly, underdeveloped and suffer from organ damage. In some cases, the calves die before reaching adulthood. This startling study by one farmer in Canada includes pictures and is very compelling.

It appears, then, that the “land flowing with milk and honey” written about in the Bible was most definitely raw!

Is Cooking Honey a Healthy Practice?

In summary, is cooking honey a good idea? Probably not given the preponderance of evidence both ancestrally, scientifically and anecdotally from beekeepers themselves that cooked honey is an entirely different food than when it is in a raw state. Clearly, more study on the subject is needed, but for now, it appears wise to select another natural sweetener for your cooking and baking efforts at home. A great substitute for honey in baking and cooking is date syrup. It is Paleo friendly and suitable for gut healing diets too because it is made only from dates.

For those on the GAPS diet who can only use natural sweeteners without disaccharides which leaves very few options, organic date syrup is likely the best choice because date sugar in granular form does not dissolve easily when cooked or baked into recipes.