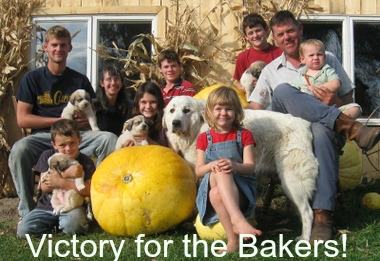 I am so glad there are farmers like Mark Baker in this world.

Mark and his wife Jill own Baker’s Green Acres, a sustainable farm where, among other bio-diverse activities, the family of 10 raises heritage hogs called Mangalitsa, a special breed that produces a gourmet quality meat prized by high-end restaurants as well as health conscious consumers seeking nutrient dense, locally produced meat.

Mark and Jill started Baker’s Green Acres over 10 years ago when Mark retired after 20 years serving his country in the US Air Force. Unfortunately, the country he put his life on the line to protect turned on him as he sought life, liberty and the pursuit of happiness as a quiet, peace loving farmer.

The problems started back in 2010 when the Michigan Department of Natural Resources (DNR) issued the Invasive Species Order (ISO), approved by the governor, which banned all heritage pigs. The DNR order is intentionally ambiguous in its description of what it calls “feral” pigs. Ambiguity renders power, essentially allowing the DNR to shut down any hog farmer it chooses. 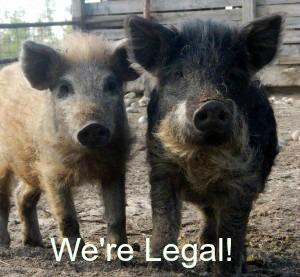 Mark refused to comply and fought back by suing the DNR over the legality of the Invasive Species Order.

The lawsuit cost the family dearly.  The DNR fined the Baker’s $700,000 ($10,000 for each of the 70 “illegal” pigs) and even impaired their ability to sell food from the farm – literally trying to starve them out and put them on the street with continued lawsuit delay tactics.  At one point, the family endured having their power cut off.

Unwilling to back off, the Bakers courageously withstood the hardships to see their day in court surviving on donations from thousands of activists around the United States and the world, including many readers from this blog.

Apparently realizing it would get skewered in the court of public opinion, on February 26, 2014, the DNR reversed its position and suddenly the pigs the department sought to condemn were now legal.

Pete Kennedy, President of the Farm-to-Consumer Legal Defense Fund had this to say on the surprise reversal:

“DNR changed its position because it did not want a trial focusing on the merits of the Declaratory Ruling. For two years, DNR has said the Bakers’ pigs are illegal, then two weeks before trial, they say the pigs are okay. Why didn’t the state take this position two years ago? The state should compensate the Bakers for the losses it has caused the farm.”

With the pigs’ legality no longer in dispute, the judge assigned to the case granted the DNR’s motion to dismiss Baker’s lawsuit. While it is certainly great news that the Baker’s ordeal is now permanently over as the case was dismissed with prejudice, the golden opportunity to challenge the constitutionality of the ISO for the 2000+ other farmers in Michigan with heritage breed hogs was lost.

On a positive note, Mark Baker’s courageous stand against an overzealous, overreaching state bureaucracy is making waves beyond the borders of Michigan.  In January 2014, the Indiana Board of Animal Health revised its regulation concerning the legality of wild hogs to specifically clarify that pigs raised on a farm did not apply.

In addition, Mark Baker’s determination has emboldened other farmers in Michigan. According to the Farm-to-Consumer Legal Defense Fund, which provided funding for Mark Baker’s legal representation in the case, a Marquette County judge is scheduled to rule on a challenge to the ISO from another farm within the next couple of weeks.

To donate to the worthy cause of supporting the Farm-to-Consumer Legal Defense Fund which tirelessly defends farmers like Mark Baker each and every day to preserve the basic right of food freedom in the United States, please click here.

Teen Slang Bodes Well for the Future of Food