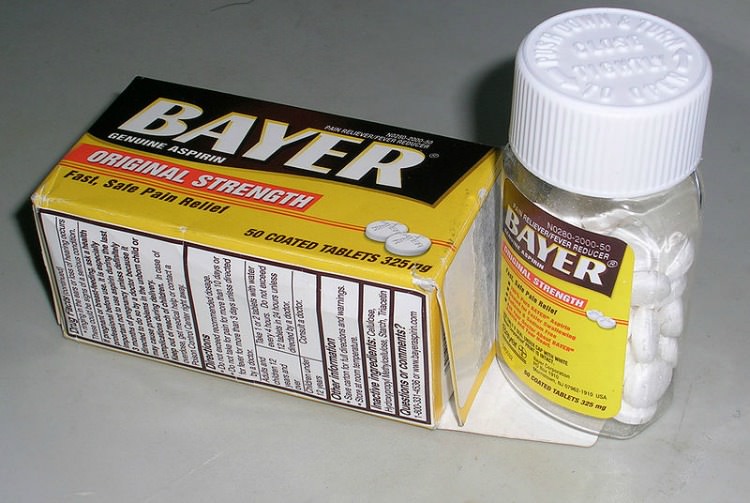 Another medical sacred cow bites the dust. Time to chuck that baby aspirin bottle in the trash if you haven’t already.

My Mother, who is 88 years old, has never had a heart attack, stroke or angina, religiously takes a coated low dose aspirin “every other day” on the advice of her physician.

A couple of years ago, she was complaining of heartburn and her doctor thought it was heart pain. After placing a stent, the pain continued and it was found that she had had several ulcers which were caused by the bacteria Heliobacter pylori: h.pylori for short.

She was given a high dose of antibiotics to combat bacterial infection. After an emergency visit to the hospital because of a reaction to the medication, her doctor paid her no further attention except to prescribe daily aspirin and proton pump inhibitors like Prilosec.

In some time she was informed that she needed a medical procedure to look at her stomach lining which involved IV anesthetics in a hospital setting. After the procedure the gastroenterologist showed us photos of her stomach lining which was inflamed. There were angry red specks everywhere. He informed us that the aspirin had caused the inflammation but she needed to keep taking it because it protected her heart!

The truth is that there is no evidence that aspirin prevents cardiovascular disease in men and women 80 years or older. 1 But despite this, elderly are regularly recommended aspirin when the potential benefit due to a reduction in myocardial infarctions outweighs the potential harm due to an increase in gastrointestinal hemorrhage.

The risk of bleeding from aspirin usage is especially higher in the elderly. 2-3 More worrisome, recent studies have linked regular use of aspirin with the development of macular degeneration, an eye condition which leads to blindness. 4 -5

A recent article in the Journal of the American Board for Family Medicine reports that:

“ Even with new evidence against the use of aspirin for primary prevention, it is difficult to change beliefs about the effectiveness and safety of aspirin, as reflected in the behavior of physicians and patients.” 6

But other groups may not benefit as well. In 2002 the U.S. Preventive Services Task Force (USPTF) started recommending the use of aspirin as primary prevention for patients at high risk of developing cardiovascular disease.

They still recommend aspirin use but differently in men versus women:

–for men age 45-79 to reduce risk of myocardial infarction (MI) when a net benefit is present.

–for women age 55-79 to reduce risk of ischemic stroke when a net benefit is present.

And how to determine “net benefit? It is totally up to the physician.

The USPSTF provides an online instrument to calculate the ten-year coronary heart disease risk as a means of deciding if aspirin ingestion would yield a “net benefit.” The USPSTF is an independent panel of 16 so-called experts in prevention and evidence-based medicine and is composed of physicians and psychologists. 1

On two occasions the US Food and Drug Administration (FDA) has denied approving aspirin for the primary prevention of cardiovascular events and stroke in any population because of a lack of evidence supporting its efficacy. 6  The most recent denial was a citizen’s petition from Bayer to add primary prevention of heart attacks and strokes to aspirin labeling.

A new and emerging use of aspirin for the prevention of deaths from colon cancer was also evaluated in the same meta-analysis and no overall beneficial effect of aspirin use on cancer deaths was found. 7

The American Heart Association recommends regular aspirin usage for secondary prevention of acute cardiovascular events since 1997. Secondary prevention means that the person has already had a heart attack, stroke or angina. 8 For these patients, the benefits of taking aspirin may be outweighed by the increase in internal bleeding. Aspirin interferes with platelets, which help the blood to clot. A 2010 study showed that patients taking aspirin showed a higher risk for recurrent heart attack and heart problems.3

The most common side effect from regular aspirin usage is upper abdominal pain from gastric irritation. Enteric-coated aspirin is recommended to deal with this. 8 The coating supposedly prevents inflammation of the stomach lining but contains aluminum, around 50 mg. per pill 9 Aluminum has been strongly linked with the development of Alzheimers Disease.10 To reduce the risk of bleeding medical professionals recommend a proton pump inhibitor (PPI) like the “little purple pill” Nexium or Prilosec and similar medications in combination with the aspirin. PPI’s reduce the level of stomach acid and thus dramatically impact digestive efficiency. They are closely linked to the development of osteoporosis, B 12 deficiency, anemia, severe iron deficiency, and many nutrient deficiency diseases which can be life-threatening. 11

Aspirin is also associated with the development of ulcers and diverticular disease, and there is an increased risk of breast cancer in women taking aspirin, increased risk of kidney failure and development of cataracts, hearing loss and tinnitus. But that is not all. With frequent aspirin use, there is an increase in sudden death. Aspirin may act as a masking agent, and conceal a “cardiac event in progress.” Aspirin does not perform any better for women. 3

Some may remember the government campaign in the ’70s and ’80s cautioning parents to not give aspirin to infants, from birth to 18 years of age especially after a viral illness. The warnings were prompted by the many cases of children taking aspirin who developed Reyes Syndrome. Researchers today believe that the Reyes Syndrome was caused, at least in part of the cases, by a metabolic failure of the mitochondria from virus, pesticides, medicine, or stress. 12 The warning still appears on aspirin packaging. 9

Did Overly Liberal Use of Aspirin Contribute to Flu Deaths in 1918?

Autopsies of young adult victims who died early on during the 1918-1919 flu pandemic which accounted for a high number of cases showed wet and hemorrhaging lungs and pulmonary edema. Physicians of the day prescribed huge amounts of aspirin, up to 31 grams per day. Today we know those amounts produce toxicity as well as pulmonary edema.

Recent results with aspirin overdoses show similar lung problems and a significant proportion of the deaths in persons who had pulmonary edema could be explained by aspirin overdose. Aspirin overdose has serious consequences including hallucinations, confusion, seizure, cerebral edema, and coma. The most common cause of death following overdose is cardiopulmonary arrest.13

A government panel recently recommended daily low-dose aspirin use after 12 weeks of gestation for pregnant women in order to reduce the risk of pre-eclampsia and premature birth. Fans of Downtown Abbey may remember the death of the daughter, Sybil, who developed eclampsia at a home birth. Eclampsia. It is characterized by high blood pressure, protein in the urine, liver disease and blood-clotting abnormalities.14

Most people switched from aspirin to acetaminophen (Tylenol) and other pain relievers at the end of the 20th century. In 2013 the FDA issued a warning that acetaminophen can cause rare but fatal skin reactions with actual skin death. Overdose accounts for most cases of acute liver failure in this country. Contrary to popular belief, acetaminophen does not reduce inflammation. Its history is fraught with reports of harm… it’s deadly to cats, dogs, and snakes. But what about people? Dr. William Shaw, Ph.D., Director of Great Plains Laboratories, who has done extensive work with autistic children, points to acetaminophen as a possible cause of rising rates of autism, asthma and Attention Deficit Disorder (ADHD). 15

In addition, acetaminophen has been linked with shockingly high rates of asthma in children even when taken as infrequently as once per year.

Bottom line? Just because we can buy aspirin and acetaminophen over-the-counter doesn’t mean that that they have no health risks, especially for the most vulnerable of us, such as the unborn child, infants, young children and the elderly.

2 Pilottto A et al. The risk of upper gastrointestinal bleeding in elderly users of aspirin and other non-steroidal anti-inflammatory drugs: the role of gastroprotective drugs. Aging Clin Exp Res. 2003 Dec;15(6):494-9.

15 Shaw, W. Evidence that Increased Acetaminophen use in Genetically Vulnerable Children Appears to be a Major Cause of the Epidemics of Autism, Attention Deficit with Hyperactivity, and Asthma. Great Plains Laboratory; Ellis S. New research claims use of acetaminophen/paracetamol correlates with Autism and ADHD diagnosis rise. AND Autism Daily Newscast. October 29, 2013; Krans B. Healthline. Study: Acetaminophen during pregnancy raises the risk for ADHD. Healthline News. 2-2-14.

Dr. Sylvia Onusic is a board-certified, licensed nutritionist with a PhD in Public Health Education. She helps individuals and families recognize the physical and mental conditions related to gluten sensitivity, Celiac, and other food-related disorders, and how to deal with them most effectively.

What Folks are Saying about Healthy Home Plus!

The Making of a Medical Dissident: One Doctor’s Story of Transformation