Why Vaccines Are Scientific Fraud 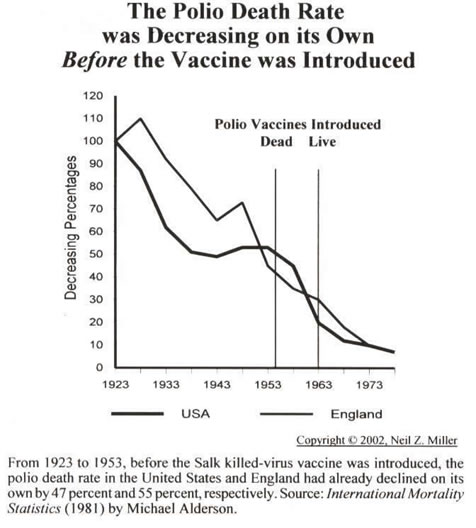 I have a number of posts on this blog discussing the dangers of vaccinations, the two most popular being Six Reasons to Say NO to Vaccination and How to Resist Pediatrician Pro-Vaccination Tactics.

A frequent argument that people in support of vaccination use to respond to these posts via email or commenting is that vaccines are an effective tool in the fight against infectious disease as they have stopped countless epidemics and that I am basically a heretic for suggesting otherwise.  These comments typically point to the “science” behind vaccines.

To show you that these arguments hold no water and that any “science” in support of vaccines actually consists of fudged data by Big Pharma and spouted ad nauseum by conventional media outlets, consider the following from the Vaccine Information Coalition:

According to the World Health Statistics Annual 1973 — 1976, Volume 2, there has been a steady decline of infectious diseases in most developing countries regardless of the percentage of vaccines administered. Researchers pointed out that infectious diseases disappeared as the result of sanitation, improved public water supplies and personal hygiene, better distribution and increased consumption of fresh fruits and vegetables.  From 1850 to 1940, diseases had declined 90% and were at an all-time low, just when vaccines started to be introduced.  In addition, diseases for which there was never a vaccine also declined dramatically (tuberculosis, typhoid fever, scarlet fever among others).

You will notice from these three charts, that in each and every case, the epidemic was already decreasing dramatically – long before the vaccine was ever introduced!

Note also that in medical textbooks, the chart showing the decline in the polio death rate is only shown from the point of the first red line forward!   This leads medical and nursing students to erroneously believe that the polio vaccine was responsible for the decline in the disease which is simply not true!  As you can see from the chart, polio was already well on its way out before the vaccine which is the same story shown in the charts for pertussis (whooping cough) and measles as well as other infectious diseases that didn’t have vaccines.

Now you understand why your doctor is so very misled about the effectiveness of vaccines.   The control of medical and nursing school curricula by Big Pharma through big research grants and donations is what makes the perpetration of this scientific fraud possible.

The real reason for the decline in epidemics – running water, improved sanitation/personal hygiene, and greater access to fresh fruits and vegetables doesn’t make anyone – or should I say – any corporations any money does it?

Here is another very informative and eye opening link with many graphs showing that, on average, 90% of the decline infectious disease occurred before the advent of vaccines!

The Battle for Extended Breastfeeding

COVID Anxiety? These Charts Will Have You Sleeping More Soundly!