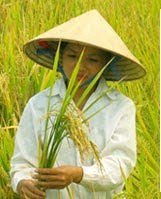 Last week, I was paging through one of my favorite magazines “Fast Company” and noticed an article about a very successful program to combat childhood malnutrition in Vietnam. In the 1990’s, two staff members from Save the Children, Jerry and Monique Sternin, arrived in Vietnam with very little funding and no language or cultural experience tasked with finding a way to combat severe child malnutrition in the poor, rural villages of the country. Even the Vietnamese government was less than helpful to the project. Jerry and Monique had only 6 months to produce results before heading home to America.

Jerry and Monique started out by interviewing and then observing the Mothers of one village whose children were healthy despite being as poor as everyone else in that local area. What were these Moms doing differently? I couldn’t help but smile as I read about the ingenuity of these Mothers, termed “positive deviants” for their ability to buck the trend of child malnourishment despite their families’ very poor state.

These small, seemingly insignificant changes were then taught to entire villages in a very hands on manner with astonishing results. Malnutrition dropped by a whopping 65% – 85% throughout the villages during a two year period! Finding small, but positive, ways to deviate from the norm is clearly the way to make huge strides for the better. Focusing on the “TBUs” (True But Useless) facts of a seemingly hopeless task is a recipe for getting nowhere and a surefire way to failure in the face of change.

This same philosophy for embracing change can be applied to modern families attempting to reclaim their own health as well as the health of their children. Small, simple changes such as putting your children on a daily dose of high vitamin cod liver oil and switching them from processed dairy to wholesome, fresh from the farm dairy have profound and lifelong effects on their health even while other imperfections in the family diet may persist.

Check out the full article for a truly inspirational story based on an excerpt from the best selling book Switch: How to Change Things When Change is Hard by Chip Heath and Dan Heath (authors of another bestseller Made to Stick: Why Some Ideas Survive and Others Die)