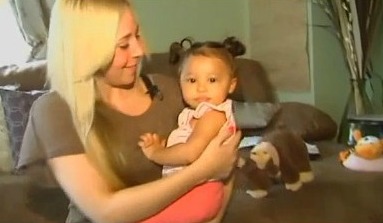 The goal for any judge presiding over a custody dispute is to come to an arrangement that is optimal in every way for the children involved.

Unfortunately, the judge presiding over the custody battle between Jessica Moser and the father of her baby appears to have let his personal distaste for breastfeeding older babies get in the way of his better judgment.

Jessica has been breastfeeding 10-month-old Jasmine since her birth last December. Like many breastfed babies, Jasmine refuses a bottle, preferring the comfort and closeness of the breast.  Jessica and Jasmine reside in Northampton County, Pennsylvania.

Two weeks ago, a local judge ordered Jessica, Jasmine’s primary caregiver since birth, to stop breastfeeding 10-month-old Jasmine in order for the baby to stay overnight for two days with her father, potentially every week.  The judge rendered this decision despite the fact that pumping enough milk for this period of time wasn’t possible or even an option is given Jasmine’s refusal to take an artificial nipple.

The seriously misinformed judge even had the temerity to suggest to Jessica that Jasmine should be on commercial formula and asked Jessica point-blank why she wasn’t on formula already.

The World Health Organization (WHO) recommends that all babies be exclusively breastfed for 6 months with continued nursing until two years of age while transitioning to solid food.

The American Academy of Pediatrics (AAP) also recommends exclusive breastfeeding for 6 months, continued breastfeeding while transitioning to solid foods through age 12 months and then extended breastfeeding after that as long as mutually desired by mother and child (source).

Unbelievably, if Jessica does not comply with the judge’s order to stop breastfeeding, Jasmine will be taken away despite the fact that his orders go completely against WHO and AAP recommendations and what is clearly best for Jasmine’s long term health.

Jessica opened up about the situation to local news channel WFMZ, explaining:

I’m feeling frustrated, hurt.  I’m trying to keep myself from crying, it’s very emotional. I’m very passionate about having that right to breastfeed.  The breast is best, and that’s what I’m trying to do for her.

Since learning of this story, local news channel WFMZ has reached out to the father’s attorney but has yet to receive a response.

I contacted La Leche League about this story in the hope that perhaps this pro-breastfeeding organization can provide legal assistance to Jessica.

Hopefully, pressure and outrage from the nursing community can quickly resolve this situation so that Jessica can continue to breastfeed baby Jasmine.

UPDATE: A few days after this story broke, the presiding judge denied that he ordered Jessica to stop breastfeeding Jasmine. However, this seems to be a spin of the actual truth. Judge Baratta flatly stated that “ultimately, this case is not about breastfeeding”.  He made note several times during an interview with LehighValleyLive.com that the fact that Jasmine was eating baby food and already 10 months old meant such a defense by the mother is “moot”.  Sadly, it appears that the benefits of extended breastfeeding of a young child are not considered important in this custody dispute by a public servant who should know better.