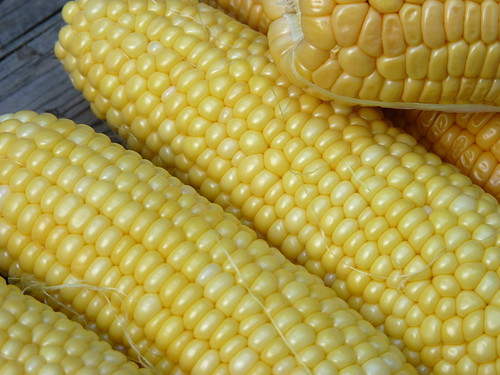 While most processed foods now contain genetically modified ingredients, GM produce has been considered off limits in recent years following the miserable failure of GM tomatoes and other vegetables in the 1990’s.

With consumers now “used” to genetically modified foods and seemingly rather complacent about the situation, Big Ag is testing the waters with “fresh” GM produce once again.

As early as this Fall, genetically modified sweet corn courtesy of Monsanto is expected to be available at a supermarket produce aisle near you.

It makes perfect sense for Monsanto to start it’s foray into GM produce with sweet corn given its death grip on the corn market – 60% within its control at last calculation.

Bill Freese, a science policy analyst with the Center for Food Safety, speculates that exposure to unprocessed GM foods may be even more dangerous than processed GM products.

“There’s a concern with these GE crops that we eat with minimal processing [like sweet corn]…we’re exposed to a lot more of whatever is in it versus a processed corn product,” warns Freese.

It is possible then for “fresh” GM produce to be paradoxically more dangerous than processed GM foods!

This is especially worrisome since the pervasive Bt toxin used in GM corn has been found in maternal and fetal blood samples and  Mothers to Be are particularly motivated to eat fresh rather than processed foods.  While the effects of the Bt toxin aren’t yet known, it certainly can’t be positive given that it disrupts the digestive process of insects eventually killing them.

Monsanto knows exactly what it is doing.  Sweet corn is normally sold by the ear in big bins and does not lend itself well to branding with the Monsanto GM label.

Since retailers will have the choice whether or not to label the GM corn, this “blend in and don’t make waves” approach works to Monsanto’s advantage.

In other words, you can be sure that there won’t be any corn bins at the supermarket with the label “Monsanto GM corn” as this would be a huge negative for the campaign given Monsanto’s poor reputation with the public.

As Marcia Ishii-Eiteman, senior scientist at the Pesticide Action Network North American explains, “We [consumers] won’t know which corn is which.”

No doubt, this is exactly what Monsanto wants.  Fast and easy consumer acceptance through ignorance.  Stealth marketing at its finest.

Antibiotics in Organic Apples and Pears to End?

Is Your Closet Making You Sick?