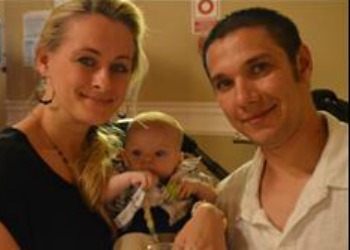 A Sacramento couple is without their 5 month old baby after Child Protective Services sent in the police to forcibly remove the child from their care.

A hearing is scheduled for Monday, April 29, 2013 on the incident which was triggered when Anna Nikolayev and her husband Alex took baby Sammy out of Sutter Memorial Hospital and sought a second opinion at Kaiser Permanente, a rival hospital, for Sammy’s flu-like symptoms.

Anna and Alex were concerned about the quality of care baby Sammy was receiving at Sutter where he was admitted nearly two weeks ago. At one point, Anna questioned the antibiotics Sammy was being given and was alarmed that the nurse administering the treatment didn’t know why the child was receiving them. Anna claims that a doctor later said that Sammy should not have been receiving the medication.

When doctors began discussing the possibility of heart surgery, the parents decided to leave without a proper discharge in order to have the child examined elsewhere.

“If we got the one mistake after another, I don’t want to have my baby have surgery in the hospital where I don’t feel safe,” Anna said.

She added, “We went from one hospital to another. We just wanted to be safe, that he is in good hands.”

While at Kaiser Permanente, the police showed up at the request of Sutter. The police told the parents that staff at Sutter had told them that the child was in such a bad state that, as Anna put it, “they thought that this baby is dying on our arms.”

After the police saw that baby Sammy was fine and examined medical records that clearly stated that Sammy was clinically safe to go home, they left.

The attending doctor at Kaiser said, “I do not have concern for the safety of the child at home with his parents.”

The next day, police came to Alex and Anna’s home.

Alex met them outside and was slammed against the wall and pushed to the ground.

His keys to the home were forcibly removed from him and the police entered the house to take the baby.

“I’m going to grab your baby, and don’t resist, and don’t fight me ok?” a Sacramento police officer is heard saying in the video.

News10 of Sacramento spoke with police on the situation and were told to talk to Child Protective Services. CPS said little about the case, only saying on Thursday, April 27 that the child was taken due to severe neglect. CPS spokesperson Laura McCasland said, “We conduct a risk assessment of the child’s safety and rely heavily on the direction of health care providers.”

No additional details were provided.

Sammy is currently in “protective custody” at Sutter Memorial Hospital. Hospital officials refused to comment saying the case was with CPS and law enforcement and they would have to deliver a statement.

Alex sums up the situation well.

“It seems like parents have no right whatsoever,” he said.

The moral of this story? Tick off doctors and nurses at a hospital and they could very well sic CPS on you – with police breaking down your door in short order.

Think long and hard before taking your children to the hospital my friends. Once you go through that door, the medical decisions about your child are no longer within your control.

Click here for an update on this case following the hearing on April 29, 2013 presided over by Sacramento Superior Court Judge Paul Seave

Weight Loss Rule #1: Use Less Energy Than You Expend
Next Post: When Omega-3 Fats Can Be Dangerous to Your Health