Healthy Home Economist / Archives / Healthy Pregnancy, Baby & Child / What to Do When Labor is Late and Homebirth Goes Awry 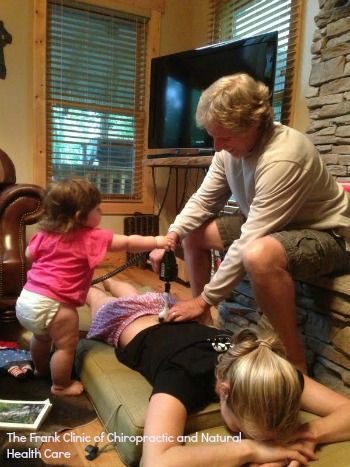 Frequently when I talk to holistic health practitioners and natural health advocates there is a distrust of traditional medical specialties. I have always viewed that we are all spokes on the wheel of healthcare and all contribute to the patient’s well being when we are doing our job properly. This article is designed to help ease those misunderstandings particularly as it relates to the birth process.

I was introduced to home birth in 1978 when I started Chiropractic school. I was in the first quarter when my wife found out she was pregnant! We took the preparatory classes, found a good midwife, ate well and our son was born in a textbook like fashion.

Within 5 years we had two more girls. Each with different midwives all with a wonderful result. We ate a whole foods diet which changed a little bit with each decade always chemical free, no refined sugars and minimally processed. The kids grew up healthy with regular chiropractic care and excellent nutrition.

There was no serious illness and no surgery required. When our son was 21 and living on his own he had a life threatening car accident causing a grade 5 liver fracture (grade 6 is death) an injured bile duct and loss of his gall bladder. This was followed by a three year stint in hospitals all around the country with many specialists including interventional radiologists, trauma surgeons and many gastroenterologists.

They were some of the most dedicated human beings I have ever met and all contributed to saving our son’s life. He is now a healthy, happily married, landscape designer.

Fast forward a few years and I got a call from our oldest daughter in tears. She had been to her OB-Gyn and was told she would never be able to have children due to her irregular cycle. I proposed we do some labs, look at her as a whole person and not as a gynecology case and see what nature could do.

Labs revealed she had a hypofunctioning thyroid. With some simple nutrients, avoidance of soy and fluorides and a little natural progesterone, she was pregnant in 3 months. She had a healthy pregnancy and chose to have a midwive. In Alabama where she lives midwives are illegal and she had to get one from Tennessee.

She also had a new OB that was on call should she need her. Her labor was fairly normal except some shoulder dystocia when our grandson was crowning but with some skillful manipulation from the midwife all was well and she had a healthy boy.

A few years later our youngest daughter, also a Chiropractor was pregnant. She chose a birthing center with a midwife, had a healthy pregnancy but her labor was delayed. She tried everything, the midwives tried everything, her back up OB even stripped her membranes and I tried everything, but after 5 days we all agreed it was time to transfer to the hospital.

When we got to the hospital she was examined by the Nurse midwife on staff. She was very sympathetic, extremely professional and suggested pitocin and an epidural. Of course we had all heard all the horror stories but felt we had no other choice. They proceeded with the plan and I was amazed how smooth everything went. No violent labor pains (my daughter was even able to nap).

The epidural was very effective and she continued laboring for several hours. The birthing center had notified us that the OB on call was known to have an attitude and not be sympathetic to natural births. When he arrived on the scene, nothing could have been further from the truth. He was jovial, in a great mood and totally comfortable with home births.

His pet peeve he told us is women that don’t take care of themselves and show up in ER at 40 weeks having no prenatal care. My granddaughter arrived with a woodstock like crop of hair and all was well!

There are several strategies I will share with you that have helped coax babies out that are late but first the bigger picture. If something is not going right with your labor and delivery, seek another opinion. Don’t be afraid of doctors in emergency situations. This is where their training is superb.

They know when life is in jeopardy and are trained how to rescue it. They may not know or understand your philosophies on raw milk, cholesterol and other lifestyle matters but for life and death situations that is their turf.

Understand that all the healthy lifestyle practices you have done will give you and your baby a much better chance of survival should you have to undergo a surgical procedure.

If you go in with a healthy attitude looking for help that is most likely what you will get!

Proper planning can help with some third trimester challenges and these are some general rules.

1.  If your baby is malpositioned in any way, seek the help of a Webster trained Chiropractor who have had great success in turning babies naturally by balancing uterine ligament and muscle tension.

2.  If you have seen a classical homeopath during your pregnancy, wonderful; there are several remedies you should have on hand though. Caulophyllum is the most common remedy to help with a delayed or stalled labor.

Find it at most good health food stores or order it by your SECOND trimester. Any potency will work. If you have a 6c take a few pellets three times a day, a 30c once a day. Only take after you are late! Aconite 30C is a wonderful remedy for fright if something is not going right. Don’t freak out take a few deep breaths and a few doses of Aconite.

Arnica is great to have after the birth to help speed up healing and recovery.

3.  If you see a health care provider that does Acupuncture wonderful! If not learn where the points LI4 and Sp6 are and massage them deeply ( should be mildly tender) several times a day if you are late.

4.  If you see a practitioner who uses Standard Process formulas have them consider Pituitrophin PMG for a late labor

Most importantly recognize that pregnancy is a state universally admired by all and there are many paths to a healthy birth!

Dr. Mark Frank has been in private practice in Zephyrhills, Florida since 1981. His specialties include traditional and light touch Chiropractic and nutrition.

He is a graduate of the University of Idaho with a Bachelor of Science in Biology. He received his Doctor of Chiropractic from Life Chiropractic College.

Dr. Frank is one of three doctors in Florida practicing NeuroCranial Restructuring. This is a specialized adjusting procedure focusing on the bones of the skull for chronic headaches, concussions, sinus problems, and TMJ disorders.

Since 1995, he has been certified as a Health Coach to allow people to experience their greatest level of health through lifestyle modification. Dr. Frank offers private lifestyle coaching as well as nutritional and homeopathic consults.

In 2006, Dr. Frank completed the Pettibon Spinal Biomechanics and Rehabilitation training, as well as the Clear-Institute training in Scoliosis correction.

In 2009 Dr. Frank studied with Dr. Datis Kharrizian author of ‘Why do I still have thyroid symptoms if my lab work is Normal’. He continues to study nutritional and metabolic medicine with Dr. K who he feels is one of the leading nutritionists and functional neurologists worldwide.

The Scary Side of Synagis

The Toxic Effects of Water Birth on Mom and Baby