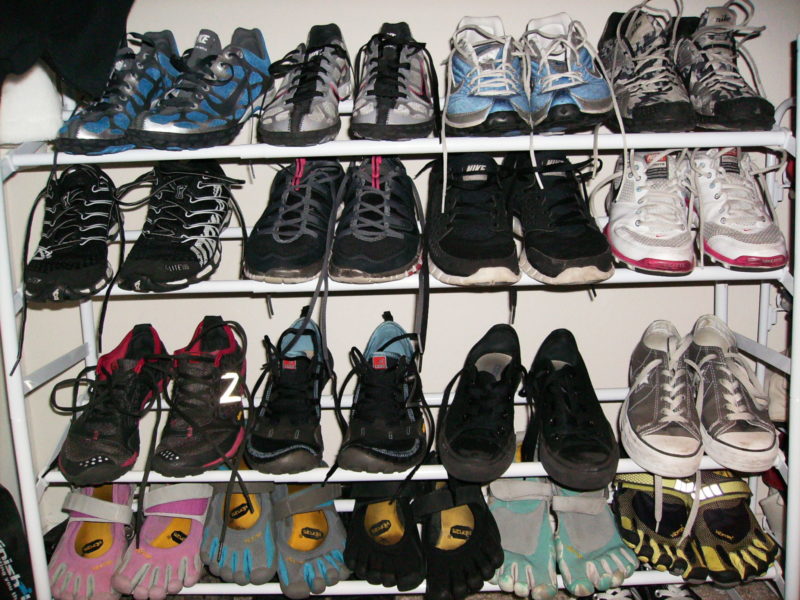 Go against nature. Plain and simple–take a look around and observe what happens when we do. Egg whites dyed yellow in cartons, powdered milk and proteins along with refined vegetable oils will do much to ruin your health.

Believe it or not, we were born barefoot and born to run. And man has been running that way for eons until the recent onslaught of the platform sneakers in the late ’70s.

Now I don’t suggest that you show up for work Monday morning wearing nothing but your five bare toes, but walking, running and just wearing shoes with artificial support, in general, will wreak havoc on your feet, ankles, knees, hips, and lower back. The cumulative damage will most likely cause grave orthopedic concerns.

But “what?”, you say “I have flat feet!” I don’t doubt it and I’ll bet they are also weak with atrophied muscles. A small percentage of the populace is actually born that way but for most of us, it is developed.

{Editor’s note: flat feet can also indicate poor and undeveloped bone structure caused by a lack of the fat-soluble vitamins A, D, and K while in the womb as researched by Dr. Weston A. Price}.

So what should you do? Go slowly.

When I was first introduced to this concept I immediately did a 360 and threw out all 16 pairs of my Nikes and other clunky shoes.

I bought a pair of Vibram five fingers and started running. I was almost 50 at the time, did not run much, had poor running form, was inefficient in my efforts and had some orthopedic concerns.

I first ran 800 m in them, not very far. My entire lower legs and feet were so sore I could barely walk for 5 days.

I continued however and tried to gradually build up the running but kept encountering the debilitating discomfort in my lower legs and feet. Quite simply, they had gone soft and weak and were not yet ready for that type of endurance. Yet I continued and tore my left calf, a grade 1 strain which took about 6 weeks to heal (once I finally laid off).

Maybe they were wrong and I needed the support? No, I did not believe that–it made too much sense. Everything I researched everything concluded we were indeed meant to run barefoot or with a shoe that simulated that offering minimal to no support.

After the calf healed I started wearing them on a daily basis, usually about 12+ hours a day–analogous to simply going barefoot. My feet and lower legs still got a workout but I could walk fine with no discomfort. After about a month of doing that for I began running short distances 2x a week and alternating every third day with a minimalist shoe like a Nike Free for longer runs that offered less support than the clunkers but more than the Vibrams. I continued that route and eventually weaned myself off them and recently ran the 11.5 mile Tough Mudder in my Vibrams. Excellent shoes for trail running.

What I have noticed from a personal level is improved running efficiency, improved coordination, balance, agility and an overall sense of being more grounded. I have had 2 surgeries on my right knee and running and certain activities often aggravated it, but not anymore. The occasional discomfort I would feel in my knee has disappeared. In fact, in retrospect, I would say that the cumulative damage from walking, running and playing sports in improper footwear probably greatly contributed to the damage I sustained in my knee.

Sadly, I see children playing and running in improper footwear taking away from their natural ability to squat, run and jump which will likely lead to problems later in life.

If you are an efficient runner, perhaps younger or with little to no orthopedic concerns you should do fine with them. Convert slowly, testing the waters and increase usage wisely. Most of my clients have converted to running “barefoot” with little to no problems. Some of my favorites as seen in the picture include Vibram five fingers, Inov8 195 & 180’s and New Balance trail minimus. More and more barefoot footwear is hitting the market daily.

Do your feet and body a favor and throw out your clunkers because even though the shoe “fits” doesn’t mean you should wear it.

Editor’s Note: To learn more about the benefits of going barefoot and contacting the energy of the Earth directly, be sure to check out the acclaimed book Earthing, by Martin Zucker.

The Junk Has Most Definitely Left the Trunk!

Managing the Impact of Chronic Stress on Fitness Goals