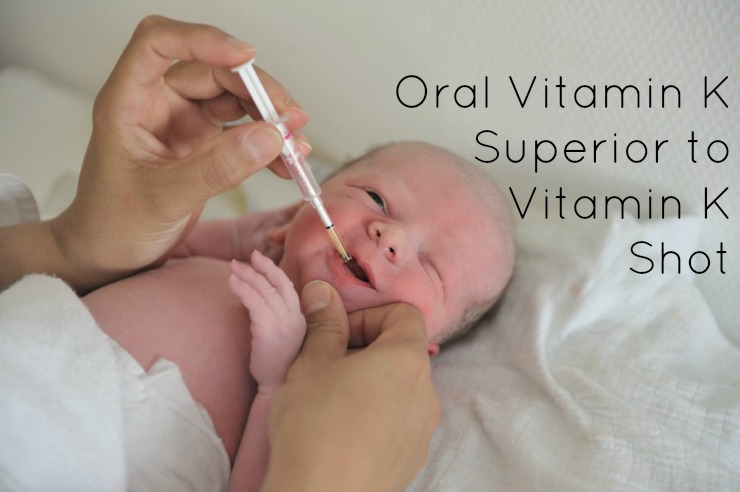 The advent of the global economy has many new parents closely examining standard newborn procedures. The reason is that these requirements can differ dramatically from one area of the world to another such as the EU and the US. One trend is that many are now considering oral vitamin K as an alternative to the routine injection of vitamin K within minutes of birth.

Why is Supplemental Vitamin K Needed for Newborns?

Vitamin K is given to newborns to prevent Vitamin K Deficiency Bleeding (VKDB). Prior to 1999, the term Hemorrhagic Disease of the Newborn was used for this condition.

VKDB is defined as bleeding from any source stopped by the administration of vitamin K. Vitamin K is a fat-soluble group of vitamins (Vitamin K1 and K2) that are essential for the production of the factors needed to clot blood.

There are three types of VKDB: early, classic, and late. Late onset VKDB is the key reason for vitamin K supplementation shortly after birth. This condition can present anywhere from 8 days up to 6 months of age. While extremely rare, late onset VKDB is often fatal (20% of cases) or results in serious morbidity (40% of cases). Bleeding in the brain is often the first sign of VKDB. Up to a ten fold higher rate for late onset VKDB occurs in parts of Asia possibly due to genetic or environmental factors (1).

An injection to protect the baby from this scary outcome may seem harmless enough at first. Hey, it’s just a vitamin, right? And, it’s for the baby’s protection after all!

When a critical thinking adult delves into the issue more deeply, serious concerns emerge. Most notably, the toxic ingredients in this drug (yes, it’s a DRUG) set off alarm bells.

No Actual Vitamin K1 in the Vitamin K(1) Shot

Most shockingly, phylloquinone, the safe and natural form of vitamin K1, is not present in the vitamin K shot.

It’s hard to believe, but yes, the vitamin K shot contains no natural vitamin K1 at all.

Instead, the shot contains phytonadione, a synthetic vitamin K1 analog. Phytonadione can cause severe, sometimes fatal, allergic reactions when injected into a muscle or vein (2).

According to Dr. Joseph Mercola D.O., it is better to take K1 orally or injected subcutaneously (just under the skin). He suggests:

Giving newborns a syringe full of vitamin K may cause psychological trauma, give infants 20,000 times more vitamin K dose than what is needed, and create an environment for infections to occur (3).

The fact that the vitamin K shot contains synthetic injected phytonadione is sufficient enough reason to decline it. But that’s not all. There are other toxins in the shot:

The rates of late VKDB for an infant is further reduced to .1 per 100,000 when the baby is injected with 1.0 mg of synthetic K at birth.

United States 20 Years Behind on Vitamin K for Newborns

It seems that the rest of the world is figuring out that the synthetic vitamin K shot really isn’t such a good idea after all. This realization is leading to the increasing popularity of safer alternatives such as oral vitamin K.

Oral vitamin K is a safe and viable alternative to the synthetic vitamin K shot. Even though oral vitamin K is not as efficiently absorbed as when injected, an adjustment to the dose as described above easily compensates.

According to the Cochrane Collaboration (an international committee of medical doctors of the highest caliber):

Very similar rates of protection against classical and late hemorrhagic disease can be achieved by giving repeated oral doses, either 1 milligram weekly or 25 micrograms daily.  Undertaking this form of oral prophylaxis requires that parents accept responsibility for ensuring the course is completed.

Vitamin K expert Dr. Cees Vermeer PhD concurs. He suggests that oral vitamin K is a better option for your infant than injection.

Which Drops to Use and What Dosage

This is a quality brand of natural oral K drops extracted from plants. Another suggestion is this brand of oral K1 drops. It contains phytonadione, the same K1 analog as the shot. While synthetic, it is much safer taken orally than when injected and has the advantage of only requiring a drop or two per dose. Natural K1 drops require more to achieve a similar dosage. This may or may not be advisable for an infant. Be sure to consult with your practitioner and come to agreement on a plan and appropriate dosage for your situation.

Dr. Vermeer suggests that mothers with excellent vitamin K1 status who are breastfeeding may not need oral K for their newborns at all. Eat your leafy greens and drink your nettle tea ladies. This is what I did. I simply maintained excellent vitamin K1 status, exclusively breastfed and never did the oral drops. However, this may not be the advisable course of action for all women, which is why oral K is an excellent and safer alternative to the vitamin K shot.

Other countries that recognize the toxicity of the injected vitamin K ingredients are using oral vitamin K drops instead.

Over two decades ago, the Netherlands eliminated the vitamin K shot. Oral vitamin K administration of 1 mg at birth was implemented instead with daily doses of 25 mcg from week 1 to 3 months of age in breastfed infants (7).

The result of this change?  No cases of Vitamin K Deficiency Bleeding (VKDB) – even late onset!

In Switzerland, a slightly different oral vitamin K protocol is used, which consists of weekly 1 mg oral doses for 2-3 months.

If your healthcare provider is leading you to believe that there aren’t safe and effective alternatives to the toxic vitamin K shot, perhaps it’s time to find another prenatal provider. It’s best to have this discussion right away, ideally at an early prenatal exam.

Incidentally, it is a good idea to order oral K1 drops yourself to have on hand during labor and delivery. Shockingly, hospital staff have been known to not have any oral K on hand when the vitamin K shot is declined.

Don’t give in to pressure to give this shot to your newborn. It can have potentially lifelong health or psychological implications. Why risk it when the safer and just as effective option of oral vitamin K exists.