When Fitness Becomes a Circus: Tragedy at the OC Throwdown 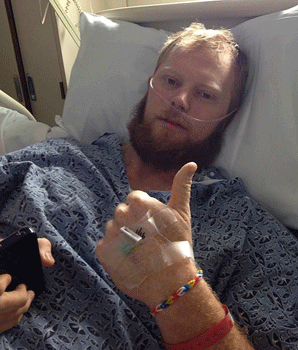 CrossFit is in the limelight again.

A recent injury at the annual Crossfit OC Throwdown in southern California has left competitor Kevin Ogar most likely paralyzed from the waist down and the media is abuzz with where the fault lies.

Is it because Crossfit (CF) is such an inherently dangerous sport, was it merely a freak accident, or was a preventable chain of events at this popular fitness competition at fault?

Kevin was seriously injured on a failed snatch attempt.  For those of you unfamiliar with the snatch it is an Olympic weight lifting movement that has been performed for decades.  The weight is lifted from a platform to arms locked overhead in a continuous movement.  In contests the weight is usually heavy enough to require the lifter to receive the bar in a squatting position.  Anyone that chooses to partake/compete at any sport at a high level puts their body at some risk.  If there were no risks there would be many champions.

Ogar was a seasoned lifter and gifted athlete, a Level 1 CF coach and by no means a rookie.  The lift was a 3RM touch n go snatch.  A 3 RM (repetition max) means the maximum amount of weight that one can properly lift 3 times.  In other words, it is heavy.  Touch n go means there is no resetting between the reps.  You had better know what you are doing, have excellent technique and know how to bail.  Bail?  When attempting a 3RM or any type of repetition max you need to be well acquainted with how to get out from under a lift when it fails.  Because you will fail at times in order to succeed.

Some lifts can be spotted such as a bench press or back squat.  2 lifters are on either side standing by to take the bar if an attempt fails.  That is not possible with a snatch or Olympic lifts in general.  You have 2 choices, you miss backwards or you miss forward.  If missing forward you drop it and get out of the way; if missing backwards you let go of it and jump forward.  Whether you miss forward or backwards will depend on where you fail on the lift.

Kevin missed the ill-fated lift backwards.  It’s hard to track the whole story but it seems like after bailing from behind on the lift, the bar took a bad bounce “allegedly” off a stack of bumpers (Olympic lifting plates) placed too close to the lifting platform and then hit his back severing his T 11 and T12 vertebrae leaving him with no feeling or movement below the waist.  Or. . . did it first bounce off his back as he looked down and failed to get out of the way causing the injury?  Others mention a pre existing stress fracture that caused him to fail at the lift or the lift failed because of the fatigue of extreme programming.

Was this merely a freak accident or could it have been prevented?  All of the above are possibilities.  We will never know but it is one that should be carefully reviewed and analyzed as to prevent future such occurrences.  The direct “cause” can often be named in such accidents but there is usually a chain of events leading up to that cause.

What Happened at the OC Throwdown?

Let’s examine the programming.  More and more CF competitions are trying to outdo each other.  What is intended to be a test of fitness often ends up being a butt kicking beatdown.  The snatch is a highly taxing/technical lift requiring the central nervous system to be fresh; it is not or should not be intended for multiple reps in a fatigued state.  The 3RM event or WOD was programmed on Day 3 of the event–technical events should be early on.  I would surmise the athlete would have some degree of CNS fatigue or at least a slower reaction time.  That could have played a factor.

Spacing and equipment.  When performing a lift such as the snatch realizing there will be missed lifts the area should definitely have been cleared of interfering objects.  The plates should not have been that close behind the athlete.  That could have played a factor.

Pre-existing condition.  Was there a stress fracture in Kevin’s back causing the failed lift?  This is being investigated but others claim the injury was a direct result of the barbell hitting his back.  Again, that could have played a factor.

As a hardcore CF advocate and affiliate owner I must say this demands some logic and accountability on the part of event organizers. Let’s take a step back and realize the true goal of a competition — fitness — not beating the athlete down.  It is not meant to be turned into a circus event and outdoing others in terms of extremes.  Programming needs to be constructed with a sound strength and conditioning basis. Safety measures should be put in place with medical staffing onsite and a contingency plan.  When the event is over everyone feels as though the fittest person prevailed.

Kevin Ogar is a man down. His career was cut short and he may never walk again.   The spirit of the CF community at large has raised over $200,000 thus far to help with his skyrocketing medical costs (he had no medical insurance) which will most likely run into a lifetime of bills.  Locating the weak link in the chain will not give Kevin his pre-accident state of health back but may protect others who aspire to compete in the sport.

Need a Push? (How to Incorporate Push Ups into Your Workout)