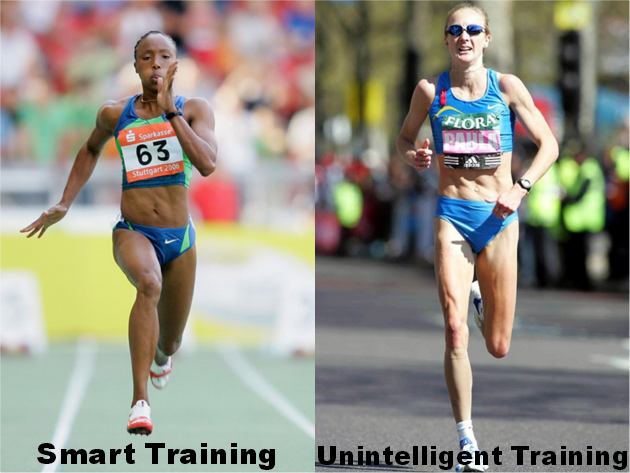 CrossFit training was initially associated with the military, law enforcement personnel and firefighters – preparing them for the unknown and unknowable.

As of late, its popularity with the mainstream has soared giving John and Jane Q. Public the ability to face everyday life with confidence.  But what if your sport is somewhat specialized– you have a goal to run a half marathon, marathon, compete in a triathlon or distance cycling race.  Is this the right program for you?

I may attempt to share wisdom and ask you why would you want to do that but I will not allow my strength bias to not guide you in the best direction.  Such was the case when a long time client/friend of my mine–Michelle finally confessed (after it was all over FB) that she was going to run the New York City marathon for her 40th birthday.

But why I asked – you have come so far; you’re dead lifting twice your bodyweight, you have weighted pull ups and an awesome tight and muscular body–why would you want to do that to yourself?  She was determined and asked me to design her training program.  Realizing there was no talking her out of it, I wanted to have her do it right with the least amount of trauma to her body.

The traditional marathoner mentality that long, slow distance gets the job done is becoming a thing of the past. And let’s face the facts – the majority of distance runners are generally weak with burned out joints.  They have little power–most cannot jump onto a 12” box let alone do push ups and pull ups.  Many are suffering from chronic overuse injuries (plantar fasciitis, IT syndrome, runner’s knee etc) and they spend an excessive number of hours each week on their training.

Combining CrossFit with endurance focuses more on technique and strength work and less on traditional obsessive long-distance training.  I don’t care how far or how often you run; running slow will never help you get fast. Intensity is the largest determining factor.  This program will only take 6 — 8 hours a week and the results have been nothing short of phenomenal.

A simplified explanation of including CF training with endurance boils down to a few basic things. . .

You can see a sample program by CrossFit Endurance’s Brian McKenzie here http://running.competitor.com/files/2011/05/12-Week-CFE-Advanced-Training-Plan-master1.pdf

Why is there no long, slow distance (LSD) in the program?  “Long slow distance” is solely aerobic in nature.  While it will increase cardiovascular function, better fat utilization, greater capillarization and increase mitochondrial growth it also has several drawbacks.  Such as decreased strength and muscle mass, decreased power, speed, anaerobic capacity and testosterone levels.  Not to mention it is very time consuming.  It is obvious the drawbacks overpower the limited benefits.

The anaerobic/sprint/speed work has the following benefits and drawbacks.  Benefits include increased cardiovascular function, decreased body fat, increased muscle mass, strength, power and speed and increased anaerobic capacity.  The drawback is intensity can speed up overtraining so strict attention must be paid to recovery. The stamina replaces the LSD or aerobic training.  The adaptations caused by anaerobic training are similar to the traditional high volume endurance training but at much lower training volumes.

Isn’t this specificity–the very thing CF is not supposed to do?  Yes to a degree it is but I view it as taking a great program (CrossFit) for General Physical Preparedness and adapting it to a more specific goal.  It’s shifting the emphasis to the endurance aspect without negating or ignoring strength, power and speed.  What we end up with is a winning combination for those seeking to train for a distance event to the best of their abilities without losing other aspects of fitness and avoiding overuse injuries.

Using Fitness to Turn Back the Clock

Surviving a Move and Staying Healthy During the Process