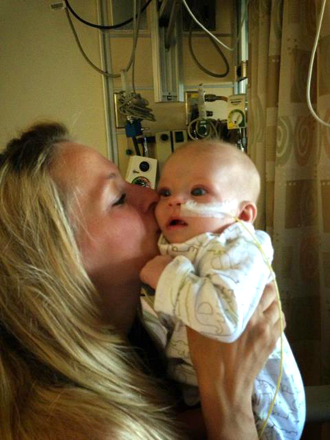 The right of parents to determine the course of medical treatment for their children has suffered yet another slap in the face.

On April 29, 2013, a hearing took place regarding the Gestapo style abduction by Child Protective Services of 5 month old baby Sammy after his parents, Alex and Anna Nikolayev, took him out of Sutter Memorial Hospital in Sacramento.

They left Sutter Memorial in order to seek a second opinion at Kaiser Permanente, a rival hospital, for Sammy’s flu-like symptoms.

Anna and Alex sought medical treatment at Kaiser because they were extremely concerned about the quality of care baby Sammy was receiving at Sutter Memorial.

When doctors at Sutter Memorial began discussing the possibility of heart surgery for the infant, the alarmed parents took the baby and left as the medical staff would not discharge Sammy so they could seek another opinion regarding the child’s heart murmur.

“If we got the one mistake after another, I don’t want to have my baby have surgery in the hospital where I don’t feel safe,” Anna said.

She added, ”We went from one hospital to another. We just wanted to be safe, that he is in good hands.”

While at the second hospital, medical staff determined Sammy was fine. The attending doctor at Kaiser said in a written statement, “I do not have concern for the safety of the child at home with his parents.”

Despite the all clear from the medical staff at Kaiser, CPS escorted by armed police showed up at the Nikolayev’s home the next day and took baby Sammy in outrageous and dramatic fashion.

“I’m going to grab your baby, and don’t resist, and don’t fight me ok?” a Sacramento police officer is heard saying in the video.

Prior to abducting the baby without so much as a warrant, Alex was slammed against a wall, pushed to the ground and his house keys forcibly removed from him after meeting with officers outside.

Worst of all, after taking the baby, CPS returned the child to the protective custody of the exact same hospital the parents had originally fled to seek a second medical opinion – Sutter Memorial – for wanting to perform unnecessary open heart surgery on the infant.

Court Hearing a Slap in the Face to Parent Rights

At a hearing on the matter, Sacramento Superior Court Judge Paul Seave determined that custody should be immediately returned to the parents.

The Nikolayevs can now see Sammy whenever they want. They also supposedly now have full control over the child’s medical decisions.

In reality, however, the Nikolayevs are still under the thumb of CPS and their rights as parents continue to be violated.

Rather than the child returning home where the parents would continue under the care of medical staff at Kaiser Permanente which was their original choice, baby Sammy was transferred by court order to yet a third hospital – Stanford Medical Center.

The judge also ruled that Anna and Alex must follow all medical advice from now on, including not taking their child from Stanford Medical Center without proper discharge.

Why are Anna and Alex being forced to follow the medical advice of Stanford Medical Center and not the medical staff at Kaiser Permanente who determined the child was safe at home for the time being?

Why is this child still in the hospital and not at home and under the supervision of the medical staff the parents originally chose?

Most alarming, Child Protective Services is still involved with this case even after its Gestapo style abduction of the child as captured on home video.

While Sammy will be returned to the custody of his parents upon discharge from Stanford Medical Center, CPS will continue to monitor the situation with regular home visits by a social worker.

Why is CPS being permitted by the court to monitor this child when the parents did nothing wrong?

Inexplicably, Alex and Anna are still vulnerable to future action by CPS for the “crime” of seeking the medical care for Sammy that they saw fit.

Baby returned to parents after mix-up over ‘neglect’