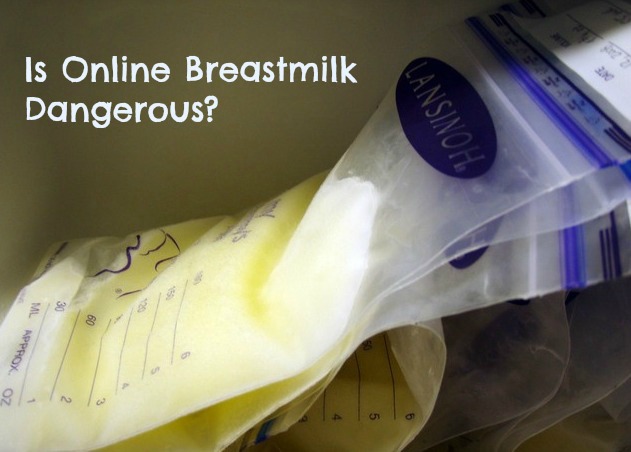 A study published two days ago in the Journal Pediatrics is sure to give new mothers pause and potentially dampen growth of the burgeoning online business of breastmilk exchange and non-commercial milkshare.

The practice has seen a surge in recent years as new mothers unable to nurse their babies or finding themselves short on supply have turned to internet websites where mothers with ample supply offer human milk for donation or purchase. In 2011 alone, approximately 13,000 people offering to broker breastmilk deals posted on the four top websites.

The study involved 101 breastmilk samples which were purchased online last year from classified ads on the website onlythebreast.com and were then analyzed by a team of researchers from Nationwide Children’s Hospital in Columbus, Ohio.  The samples were purchased for between 50 cents and $3 per ounce.

Of the 101 samples analyzed, 72 were contaminated with bacteria and would not have met criteria for feeding without pasteurization set by the Human Milk Banking Association of North America (HMBANA). Surprisingly, the frozen milk was just as contaminated as thawed milk.

Lead researcher Sarah A. Keim charged that the contamination was due to poor milk collection, storage or shipping practices.  Coliform, staphylococcus and streptococcus bacteria were discovered.  20% of the samples contained cytomegalovirus, or CMV, which can cause serious illness in premature or sick babies.

Although no testing was done in this area, Keim speculated that “you could be exposing your infant to chemical contaminants, pharmaceuticals or drugs as well” by utilizing online breastmilk exchanges to feed your baby.

When contacted by NBC News, representatives from onlythebreast.com said that they will be halting informal breastmilk exchange based on the study.

Site founder Glen Snow said, “We have made the decision to transition away from offering breast milk classified ads and in the near future completely remove them.”

Snow also intends to revamp the organization by forming a new milk bank program called Milk for Babies.  The new approach would involve laboratory screening of milk samples while still permitting donors to be reimbursed.

The major problem with this is that the cost of lab screenings of breastmilk samples will no doubt cause the sourcing of online breastmilk to become unaffordable for many (if not most) new mothers seeking its benefits for their babies.

While the results of the Pediatrics study are indeed disturbing, mothers searching for a way to optimally feed their babies and avoid commercial formula should not be overly alarmed by these findings.

No babies have been reported sick from consuming breastmilk obtained via online exchanges.

In fact, when I first read this report, which was perhaps not so coincidentally performed by a children’s hospital where commercial formula is aggressively pushed on new mothers after their babies are born, I considered the fact that this study may have been funded with the sole purpose of supporting the interests of the infant formula industry.

It seems others have had similar intuitions. The study has already caused an uproar in the breastfeeding community as advocates of non-commercial milk-sharing sites say the research unfairly tarnishes efforts in recent years to boost access to human milk for all babies even when their mothers aren’t able to breastfeed or produce enough.

Khadijah Cisse, a midwife who founded Milkshare, had this to say in an email to NBC News:

“A blatant attack on women attempting to feed their babies is cruel and you should feel ashamed of yourself for spreading misinformation. Anyone can type up any bit of lies they want and make claims. Breast milk is supposed to contain bacteria.”

Could the lack of complete understanding of the amazing properties of human breastmilk be to blame for the disconnection between the study’s findings and the actual results of breastmilk exchange which have produced no illnesses?

It is also important to note that the researchers only obtained samples from classified ads, not non-commercial milk sharing sites. Emma Kwansica, founder of the sharing site Human Milk 4 Human Babies, says that the women her site connects aren’t strangers engaging in commerce.  She said:

Peer-to-peer milk-sharing is really about families sharing at a hyper-local level. This study could not have been more opposite of what our moms are doing in the world today. If there are babies getting sick from milk sharing, I would know. There are no sick babies.

FDA and Academy of Pediatrics Warns Against Breast Milk Sharing

The ever germaphobic Food and Drug Administration and the American Academy of Pediatrics both warn women not to feed babies breastmilk obtained via the Internet or even directly from individuals in their community.

Kim Updegrove, president of Human Milk Banking Association of North America says, “I long to have people view this the way that they view blood products” as breast milk can transmit infections like HIV and tuberculosis.

Her organization represents a network of a dozen commercial milk banks in the U.S. and Canada that supplies pasteurized donor milk to premature and medically fragile babies through medical prescriptions only due to scarce supply.

Updegrove says that commercial formula, though not ideal, is a better option than potentially unscreened breast milk from a stranger. “While it’s certainly not ideal, if you have a healthy, full-term infant, that infant is likely to do just fine on formula.” she said.

And there you have it folks: the blatant plug for commercial formula we were all waiting for with the release of this study by the conventional media.

GMO commercial formula versus breastmilk sharing where not a single case of infant illness has been reported?  I’ll take my chances on Mother Nature and breastmilk, thank you very much.