13% of Pediatricians Reject CDC Vax Schedule for Their Own Kids 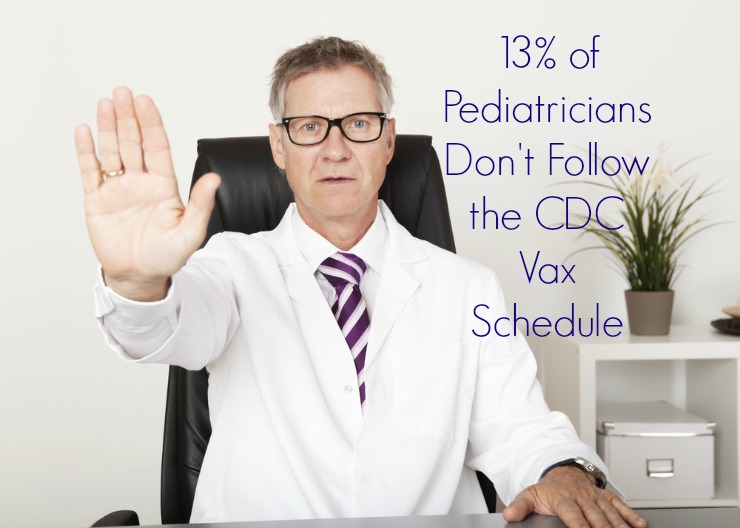 If it is so well proven that following the CDC Childhood Immunization Schedule is of clear benefit to a child’s health and the community at large, why are so many pediatricians choosing to opt out or diverge from these guidelines?

A study published in the Open Journal of Pediatrics (1) revealed the stark truth that the mass media seems to refuse to acknowledge, the public is in the dark about, and dissenting pediatricians won’t reveal to their own patients for fear of having their careers jeopardized or worse, their license to practice medicine yanked.

A full 6% of pediatricians do not vaccinate their own children according to CDC guidelines and a whopping 13% do not plan to follow CDC guidelines when vaccinating their children in the future. When you expand the scenario to include pediatric specialists, the number jumps to 21%.

With regard to the MMR vaccine, the numbers aren’t much better regarding CDC compliance.

5% of general pediatricians and 19% of pediatric specialists planned to postpone the MMR jab for their own children until after 18 months of age, beyond CDC guidelines.

The most common reasons why pediatricians have already avoided at least one vaccine for their children, or plan to avoid vaccines for future children, are concerns about safety and too many vaccines given at once.

Sounds like exactly the same reasoning as “uncredentialed” Moms and Dads who choose not to vaccinate their children!

Here is a quotation from this study:

Ten percent of pediatricians and 21% of pediatric specialists claim they would not follow [CDC] recommendations for future progeny. Despite their education, physicians in this study expressed concern over the safety of vaccines.

Given that such a large percentage of pediatricians reject at least some (if not all) vaccines for their own children and do not follow the CDC’s timetable on when to administer vaccines to their own children, how could laws be justified which disallow the same right of refusal to parents such as what is happening right now in California, New Jersey and others?

This study is not alone in shining a spotlight on the growing refusal to follow the CDC Childhood Vaccination Schedule not just by parents but by physicians themselves.

The Journal of Health Communication (2) revealed that 11% of pediatricians and family doctors do not recommend to parents that their children should receive all vaccines. Physicians in this survey also expressed concerns about vaccine safety.

With unbelievably toxic ingredients as listed below that a child is subjected to over and over and over if the CDC guidelines are followed, it’s no wonder more physicians are saying “no thanks”.  According to Environmental Defense[3] (formerly known as the Environmental Defense fund), all vaccine ingredients are poisonous, carcinogenic or potentially harmful to the skin, gastrointestinal, pulmonary, immune and neurological systems in our bodies.   Here’s the list as provided by the Vaccine Information Coalition:

If so many pediatricians and family doctors doubt vaccine safety enough to opt out or diverge from the CDC guidelines for their own children, maybe more vaccinating parents should rethink what they’re doing too. At the very least, people who choose to follow the CDC vaccination guidelines should not be critical of parents who choose to reject it as there are a lot of doctors on their side.

Vaccination Practices Among Physicians and Their Children Open Journal of Pediatrics, 2012, 2, 228-235
Physicians Who Do and Do Not Recommend Children Get All Vaccinations J Health Commun, 2008 Sep;13(6):573-82
Aluminum and Vaccine Ingredients
Six Reasons to Say NO to Vaccination
“Lunchables” Creator Won’t Feed Them to His Own Kids

I Thought Chemtrails Was Conspiracy Theory. Then I Saw This …

What to Expect at School Post-Lockdown (disturbing photos, video)