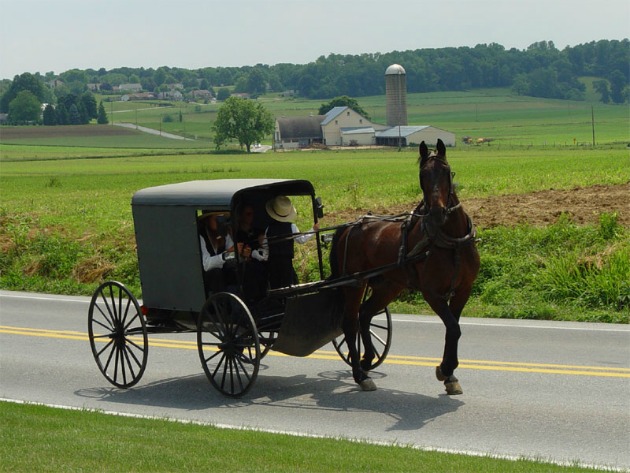 For the past several months, this blog has been following the saga of Sarah Hershberger, a 10 year old Amish girl whom Akron Children’s Hospital in Ohio was trying to force into a second round of experimental chemotherapy for lymphoblastic lymphoma, an aggressive form of non-Hodgkin lymphoma, despite the fact that she was in complete remission confirmed via 3 cat scans and blood tests.

Sarah’s parents, Anna and Andy, even fled the United States with their daughter to avoid the court mandated hospital guardianship that stripped their inalienable parental right to make Sarah’s medical decisions.

The following is a press release from the 1851 Center for Constitutional Law, the legal firm representing the Hershberger family.

Official who had sought to take family’s daughter from home and force chemotherapy on her, despite parent’s earnest objections and Health Care Freedom Amendment, resigns as guardian

Columbus, OH – The 1851 Center for Constitutional Law today accepted the Resignation as Limited Guardian of a state official attempting to, on behalf of the State and Akron Children’s Hospital, force chemotherapy on ten-year-old Sarah Hershberger.

While the resignation still requires the signature of Probate Judge Kevin Dunn, Judge Dunn is expected to approve the resignation sometime next week, effectively ending the two-month stand-off with Sarah’s parents, Andy and Anna Hershberger, who, concerned that the chemotherapy was killing their daughter, sought the right to first try a less invasive alternative treatment that the hospital did not provide.

Andy and Anna, after the Court’s order, left the country to pursue an alternative treatment and prevent Sarah from being taken from them. The family reports that Sarah has responded well to the alternative treatment, the cancer is receding, and she is in excellent physical condition.

“We made it clear to our opponents that they were in for a protracted battle over fundamental principles and constitutional rights; and that on each, they were on the wrong side,” said Maurice Thompson, Executive Director of the 1851 Center.

“The Judge’s approval of this Resignation will pave the way for the family’s return home, which will allow Sarah to receive the family’s preferred treatment under the best possible conditions,” continued Thompson. “We hope that this Resignation also seals one of the darkest moments for parental rights and health care freedom in the State’s history: a court ordering a little girl to be ripped away from her loving and competent parents, and forced to submit to procedures that could kill or sterilize her, simply because her parents sought to first pursue a less invasive treatment option — – one the hospital disagreed with because it did not itself provide it.”

On November 19, the 1851 Center announced its representation of the Hershbergers, maintaining:

-Section 21, Article I of the Ohio Constitution, the Ohio Healthcare Freedom Amendment passed by 67 percent of Ohio voters in 2011 prohibits the compulsion of any person “to participate in a health care system.”

-Even before Section 21, the Ohio Supreme Court held that the Ohio Constitution ensures “personal security, bodily integrity, and autonomy,” and therefore “[t]he right to refuse medical treatment” is amongst the “rights inherent in every individual.”

-The U.S Supreme Court has repeatedly confirmed the Fourteenth Amendment to the United States Constitution clearly provides protection to parents in the “care, custody, and control” of their children, including the right “to direct the upbringing . . . of children under their control.”

-The U.S. Supreme Court has also ruled that the “primary role of the parents in the upbringing of their children is now established beyond debate as an enduring American tradition,” and “[t]he statist notion that governmental power should supersede parental authority in all cases because some parents abuse and neglect children is repugnant to American tradition.”

The litigation began when the Hershbergers removed their daughter from Akron Children’s Hospital in July, in favor of a less invasive alternative treatment, after it appeared as though chemotherapy itself was a greater threat to her than her mild form of cancer. The Hospital then moved in court to take Sarah from the Hershbergers and force treatment in July.

The hospital’s move came only after county social services officials found the Hershbergers to be quality parents, and, and despite hospital demands, refused to take Sarah from the family. The Medina County probate court found that the Hershbergers were model parents, explaining “there is no evidence the parents are unfit or unstable,” and “there is not a scintilla of evidence showing the parents are unfit.”

However, the Appellate Court used an obscure Ohio statute intended to address child abuse and neglect to order Sara to be taken from the home and forced to undergo chemotherapy.

The Court made this ruling even though Sarah’s mild form of cancer is a type that can and is being treated without chemotherapy, and despite conceding that chemotherapy may well cause loss of hair, infections, infertility, cardiovascular disease, damage to internal organs, an increased risk of contracting other cancers, and even death.

The case remains pending on a jurisdictional motion before the Ohio Supreme Court and on appeal to the Ninth District; however those appeals are likely to be mooted by the Judge’s approval of the Resignation.